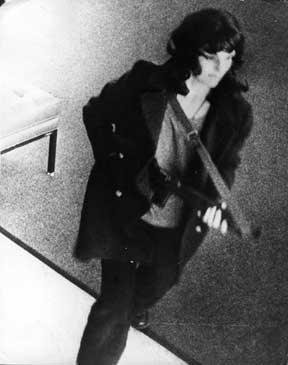 Behind the camera: Hibernia Bank security cameras
Where: Sunset District branch of the Hibernia Bank in San Francisco
Photo Summary: Patricia Campbell Hearst, known at the time as Tania, wielding a modified M1 Carbine with MP-40 stock and shortened barrel during a bank robbery.
Picture Taken: Robbery took place at 9:40 A.M. April 15, 1974 they were in the bank for 4min.

The Symbionese Liberation Army (S.L.A.) shot to media fame when on February 4, 1974, when they kidnapped 19-year-old, Patricia Campbell Hearst, the heiress and granddaughter of publishing magnate William Randolph Hearst. The media coverage again peaked when pictures of her robbing a bank were released. She had gone from being the victim to what appeared to be a willing and active participant in her captor’s terrorist group. 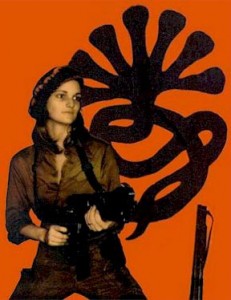 was an American terrorist group born out of a number of radical prison advocacy groups. The organization was created after the escape of Donald DeFreeze one of the founding members and leader of the SLA. While hiding out, DeFreeze and other SLA members developed the group’s imagery of the seven-headed cobra which they borrowed from naga, ancient Sri Lankan stone carvings depicting a seven-headed Cobra. Naga were placed around water sources as protectors or guardians of clean water.

DeFreeze explained the term “Symbionese” in the SLA manifesto, Symbionese Liberation Army Declaration of Revolutionary War & the Symbionese Program: “The name ‘symbionese’ is taken from the word symbiosis and we define its meaning as a body of dissimilar bodies and organisms living in deep and loving harmony and partnership in the best interest of all within the body.”
The SLA participated in a number of acts of terrorism before assassinating superintendent of schools Dr. Marcus Foster. As a result of the murder, two members of the SLA, Joseph Remiro, and Russell Little were arrested. In an effort to free their two comrades the SLA hatched a plan to kidnap an important figure so that they make a prisoner switch. They chose publishing heiress Patricia Hearst who they hoped would increase the news coverage of their group and its goals.

The Capture of Patty Hearst

19-year-old Patty Hearst was seized on February 4, 1974, from her Berkeley, California residence that she shared with her fiancé and former teacher, Steven Weed. She was taken to a house in Daly City, California where she was kept in a closet, which was 24 in. wide and 66 in. long, for 4½ weeks. While held in the closet Hearst claims to have been sexually and physically assaulted and had her life threatened unless she cooperated. She was moved again to a third-floor studio apartment in a black neighborhood in northern San Francisco, #6-1827 Golden Gate Ave, where she was kept for another 4 weeks in a closet, 19 in. wide and 60 in. long. For 57 days she was held, “Blindfolded, gagged, tied up,” in small closets during which she was heavily indoctrinated with SLA political literature. This period of confinement and abuse at the hands of the SLA would be used as evidence of her brainwashing. Later doctors would claim that she suffered from Stockholm syndrome, where hostages in a survival response sympathize with the aims of their captors. 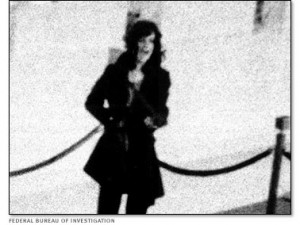 Hearst Yelling, 'I'm Tania. Up against the wall, motherfuckers.'

After her capture talks for a prisoner swap broke down and instead the SLA demanded that the Hearst family distribute millions of dollars of free food to needy families and to publish their political writings. The demands were met by the Hearst family but Patty was not released, when the SLA said more food had to be given away Randolph Hearst, Patty’s father, demanded that in exchange for the food his daughter was to be released. After Randolph Hearst’s condition was given, the talks stopped.

The weeks past with the only news that Patty was alive being tapes or “communiqués” as the SLA called them. On the recorded messages Patty seemed to be drifting towards the SLA agenda and eventually, she announced that she had joined the cause and released a picture of her holding a gun in front of the SLA cobra (shown right). One of these taped announcements also told how she had changed her name to “Tania”, after the famous German communist revolutionary associated with Che Guevara. It was assumed that she was being forced to say these things until the FBI released security footage of “Tania” robbing a bank. 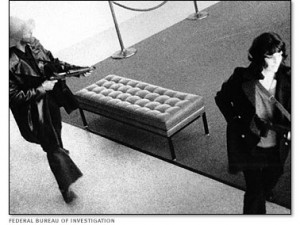 Hearst leaving the bank with DeFreeze to the left

At 9:40 A.M. on April 15, 1974, four white women and a black man burst into the Sunset District branch of the Hibernia Bank in San Francisco yelling, “It’s a hold-up! Down on the floor! On your faces, you motherfuckers!”. The group was led by Donald DeFreeze and accompanying him were SLA members Patricia Soltysik, Camilla Hall, Nancy Ling Perry and Patty Hearst. In four minutes they managed to rob the bank of $10,000, wound two bystanders and make a clean getaway in a waiting car. Patty recounted her memory of the robbery on Larry King:

“I said my name and — because I was supposed to say my name and make a speech, but it’s all pretty unclear, And then, Donald DeFreeze shot someone, and then everything went blank. … My next memory is sitting in the car leaving (the bank).

“[After the robbery] I sensed that I had, in fact, crossed over some sharp line of demarcation. … For me, suddenly it became plain: There was no turning back.”

When the attorney general saw the footage he determined that Hearst had not been forced but was a willing participant in the robbery. He issued a warrant for her arrest as a “material witness”
This later changed when another SLA “communiqués” was released where Patty claimed that at no time was a gun pointed at her, that her family were the enemy (the “pig Hearsts”), her fiancé, Steven Weed, was “an ageist, sexist pig.” and that the robbery was an “expropriation”: “Greetings to the people, this is Tania … the difference between a criminal act and a revolutionary act is what the money is used for.” It was on this tape that she declared the idea of her being brainwashed was ridiculous. After the released tape her status was changed to reflect that she admitted full participation in the crime.

After the Bank robbery, DeFreeze decided to move the group to LA so as to recruit more members. Emily and William Harris were shopping with Hearst when a security guard moved to arrest the two for shoplifting. Hearst, who was waiting outside, started firing at the outside of the store. FBI agent Charles Bates remembers that “(Hearst) pointed an M-1 carbine and fired the whole clip, … And then she took another rifle and shot some more. As I recall, there’s about 30 shots, and there were people walking along the sidewalk. … Thank God she missed them.”
The three were able to escape and ditched the van and commandeered a series of vehicles the last of which had a driver, teenager Dan Russell. Dan recalls his ordeal and that while he was alone asked Hearst, “When did you decide to go with, join their army deal?” he remembers she shrugged and replied, “I just started listening and learning from like the day I was taken away, and I started changing my views about things. It was a real process, the way I see it.” In their hurry to get away the trio forgot to clean out the van before they ditched it. When police found the van a parking ticket led to the SLA safe house.

When the other members of the SLA saw the news coverage of the incident they fled the safe house but with nowhere to go took over a house that just happened to have its lights on. Police were called and hundreds of police and swat officers descended on the house. By morning the house was surrounded and police broadcast for the people inside to come out. Some of the residents were allowed by the SLA to come out, but the SLA stayed inside. Tear gas was lobbed which sparked a two-hour shootout were over 5,371 rounds were fired at the house.
Either the tear gas or one of the thousands of bullets ignited the house and SLA members Angela Atwood, Donald DeFreeze, Camilla Hall, Nancy Ling Perry, Patricia Soltysik, and William Wolfe were killed. William Harris, Emily Harris, and Patty Hearst watched the shootout live on TV from a motel room. As part of her brainwashing, she was told that the police were hunting for her and wanted her dead. At her trial, she would point at the shootout as proof that she couldn’t turn herself in as she thought the police would kill her.

On the run and Trial 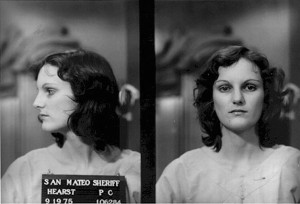 The three remaining members William Harris, Emily Harris, and Patty Hearst moved back to the San Fransisco area where they recruited more members and robbed two more banks and tried to bomb some LAPD cars. To avoid arrest Hearst and the others move around the country but in September 1975 the law finally catches up to her and she is caught and booked on bank robbery charges. While being processed she is shown smiling with the clinched handcuffed fist of a revolutionary and was quoted as saying “urban guerrilla.” when asked for her occupation.
This defiant attitude would soon change to that of the brainwashed victim during her trial. The prosecutor was able to show that Hearst had plenty of chances to get away and got the Harris couple to testify that, “she had freedom from the day she ceased to be a prisoner of war. She rode buses, went shopping, went to movies.” The prosecutor even recounted how Patty while climbing a cliff “rangers” who assumed she was in trouble came to her aid. Bill Harris said, “She could have said anything, like, ‘I’m Patty Hearst, get me out of here.’ But she didn’t.” The jury was convinced and on March 1976 Patty Hearst was convicted of bank robbery and sentenced to seven years in prison. During the trial, she took the Fifth Amendment 42 times.
Her sentence was later commuted on February 1979 by President Jimmy Carter by granting her executive clemency and in January 2001 President Clinton pardoned her. After she was released she married her former bodyguard Bernard Shaw who she has had two daughters with. She went on to find some success in acting and producing.

Other pictures of Terrorism