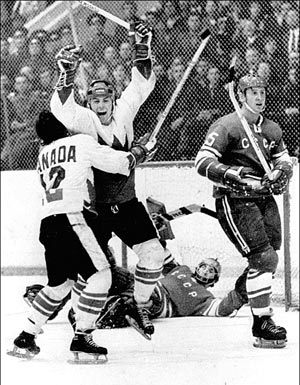 Behind the camera: Frank Lennon
Where: Moscow, Russia at the Luzhniki Arena
Photo Summary: Paul Henderson being embraced by team member No 12, Yvan Cournoyer. Soviet goalie Vladislav Tretiak can be seen on the ice with No. 15 of the Soviet Team, Alexander Yakushev, looking crushed to the right
Picture Taken: September 28, 1972, with 34 seconds left in the third period 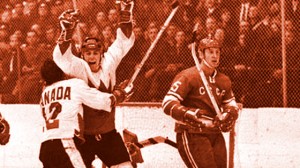 The picture earned Lennon numerous awards including, a National Newspaper Award, Canadian Press Picture of the Year and even ‘Sports Picture of the Century’ by one magazine. His paper, The Toronto Star, gave him a bonus for shooting the picture and through a mistake at the syndication department also allowed him to copyright the picture. The picture became hugely popular and Lennon who now owned the copyright got royalties from the shot. Frank continued working at the Toronto Star until he retired in 1990. Once in 1969, Frank Lennon was assaulted by John Lennon, after following the Beatle member into the Toronto airport in an effort to get a photo. Frank died on August 21, 2006, at the age of 79.
[bigquote quote=”In 1972, nobody lost … Who won? Hockey won” author=”Soviet goaltender Vladislav Tretiak”] 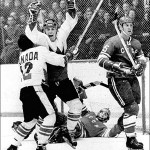 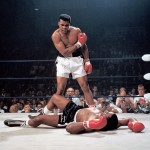