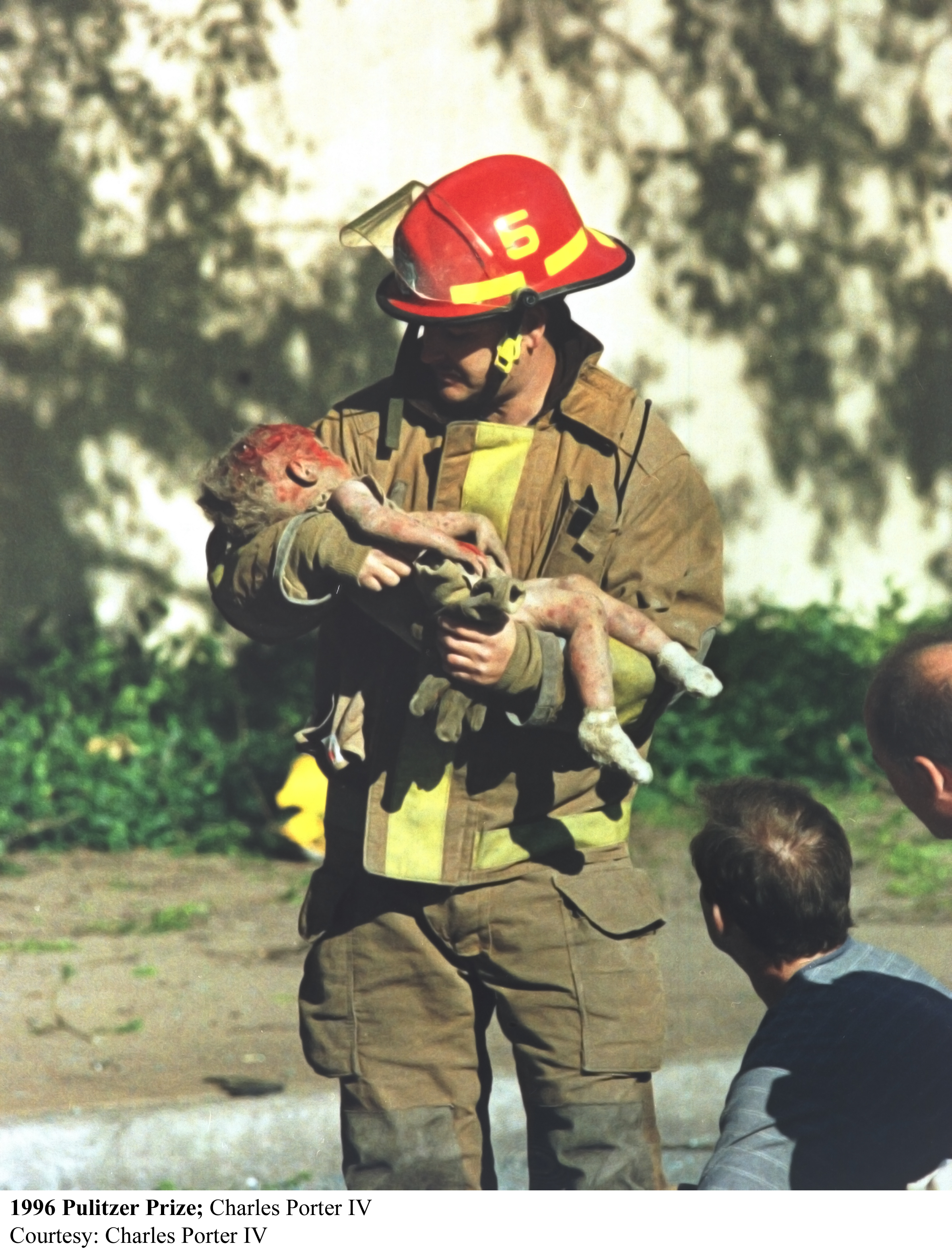 At 9:02, on April 19, 1995, Gulf War vet, Timothy McVeigh detonated 4,800 lbs of fertilizer and fuel oil. The resulting blast destroyed the Alfred P. Murrah Federal government Building and killed 168 people. The bombing, the largest act of domestic terrorism, in America, shattered pre-911 America’s innocence.
As the fires raged rescue services and bystanders rushed to pull victims out of the twisted wreckage. Sifting through the rubble police officer, Sgt. John Avera found a small half-buried body. Shouting. “I have a critical infant! I have a critical infant!” he thrust the 1-year-old Baylee Almon into the arms of nearby firefighter Oklahoma City fire Capt. Chris Fields. As Chris checked Baylee for signs of life two amateur photographers both raised their cameras. Lester LaRue and Charles Porter standing just three feet apart, yet unaware of each other, snapped the image that came to symbolize the victims of the Oklahoma City Bombing.

Charles Porter a 25-year-old credit specialist knew he had something less than 3 hours later when the clerk at the Wal-Mart photo counter stopped at one picture and began to cry. A friend told him to take the pictures to the media, and looking in the phone book he found the Associated Press office in Oklahoma City. Wendel Hudson, who was the AP photo editor in Oklahoma City right away saw the potential of the shot and sent it out on the AP wire. Porter returned home thinking that his photo might end up in the local paper until he received a long-distance call:

I go home about 1300. About 1320 I get this phone call from this lady and she says: “Hi, I am so-and-so from the London Times and I want to know if you are Charles Porter.”
I said: “Yes I am, but how do you know who I am?”
She said: “Well I just received your image over the AP wire…”
And she proceeded to explain to me what the Associated Press wire was.
I said that I didn’t know how to respond and she said, “Well sir, can I ask you one question?” And this is where it hit home: “Could I get your reaction and response to what your feelings are going to be, knowing that your image is going to be over every newspaper and every magazine in the entire world tomorrow?”
I was silent and speechless, and chills go over me just to think about the magnitude and the enormity of where that picture went and the impact that picture had at that time.
It was beyond my scope of comprehension and understanding, way beyond.

The second shooter, Lester LaRue, a safety coordinator employed by Oklahoma Natural Gas Company rushed to the scene of the explosion thinking that the blast was a gas leak. When he could drive no further he grabbed the company camera he kept in the car and started taking pictures. Later, he realized he too had something special when while developing his film the Moto-Photo clerk asked to make copies to show some people. The next day, the clerk called and said Newsweek wanted to see his negatives. The Magazine paid Lester $14,000 for the picture and it appeared on their May 1, 1995, cover. When the magazine hit the stands he became an instant celebrity and people started calling to make deals. Lester was both proud and ashamed of his claim to fame. He would sign magazines on the bottom right corner while blocking the image with his left. He was uncomfortable with the offers of money for photo rights. He worried the picture might be upsetting the baby’s mother. But a couple of weeks after the bombing, he saw Aren Almon, the baby’s mother, on the evening news saying she was proud her daughter had come to symbolize the innocence of the victims. That was enough for Lester, permission granted. Deals were made, money handed over: statues, posters, coins. His wife suggested T-shirts, with some of the profit going toward a downtown statue of the image. The shirts were only in stores a few days when he saw Aren Almon holding one of his shirts on TV livid that Lester was making money, off the image of her dead child.

Company executives at Lester’s work started to get worried. They thought the controversy was bad for public relations. Since Lester took the picture with a company camera and on company time they told him to give up the picture and any money earned, he refused. After months of neither Lester nor management budging, at 10 a.m. on September 6 his manager dropped an ultimatum on his desk. Sign over the money earned and any picture rights to the company or pack up your stuff and leave. Lester left. As he drove home in a co-worker’s car he couldn’t believe it. He had been a faithful company man for 32 years, didn’t that mean anything?

Aren Almon, Baylee’s mother had avoided seeing her dead child the day of the explosion by getting her father to identify the body. The next day the shattered Aren couldn’t avoid the sight as she instantly recognized Baylee’s lifeless body on the front page of the Daily Oklahoman. Hours later the media tracked her down at her grandmother’s house. McVeigh’s bomb not only ended her child’s life but her own apartment only a block from the explosion was windowless and filled with debris and shattered glass.
She felt alone, crushed by the loss of her child. Looking at the paper again she sought comfort in the same arms that held Baylee, Chris Fields. Reporters arranged a meeting; she only got in a few words before breaking down, perfect footage for the evening news. She came to rely on Chris calling him 2, 3 times a week. She called him so much that tabloids started to imply that their relationship had developed into something else. Chris and Aren’s fears were confirmed when photographers started to ask them to kiss on camera and request shots of Chris’s wife standing alone.
Aren gladly granted some interviews and even gave her OK for some uses of the photograph. But now the picture of Baylee in Chris’s arms was coming to symbolize the tragedy, and both she and other victims’ families were starting to resent it. Other mother’s started to speak, out of grief and jealousy, that Aren was getting all the attention. On TV one woman said, “Aren isn’t the only one who lost a child in the bombing. Why should Aren get all the publicity – and most of the donations?” At a gathering of victims’ relatives, the mother of another dead child turned to Aren and said, “We don’t have to write as many thank-you notes as you do.” In the darkest moments as the world seemed to turn on Aren she knew she could always depend on Chris. 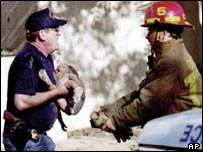 Chris Fields knew he had to be careful with his newfound fame as he knew of firemen who took it too far. One in Texas had his 15min when he saved a baby trapped in a Texas well but when the publicity faded he couldn’t take it and committed suicide. Even days after the picture was flashed around the world some of the men at his station started to grumble, “I did more rescues than he did,”. He could understand their attitude because of one picture it was Chris, not them, who got to have breakfast with Tom Brokaw and Barbara Walters and get free trips to New York and Los Angeles for TV interviews.
Chris by all accounts didn’t let the attention go to his head; he didn’t even consider himself a hero. How could he when everyone he tried to save that day was dead or died later of their injuries. The one thing he could do was being there for the Aren. He thought Aren would find it was important that as he was the last one to hold Baylee. He felt it was his duty to comfort and protect her.
When resentful bombing victims vilified her on the TV news, he defended her. When she needed help to stop the exploitation of Baylee’s photo, he gave her names of lawyers. As time went on he felt more of a friend to Aren rather than Aren being just another one of his duties as a fireman.
On March 29, 2017, it was reported that Chris Fields retired after 31 years, 7 months and 16 days at the Oklahoma City Fire Department. The veteran firefighter said that after the bombing, Fields came to realize “PTSD is a real thing,” The smell of wet concrete triggers painful memories for him because it rained on the day of the blast. It took years of counselling for PTSD for Fields to recover and he wants his example to get other first responders and their bosses to pay attention to mental health. “Twenty or 30 years ago, you just didn’t show emotion, you went on about your day… we’ve come so far since then,” he said.

A memorial now sits on the grounds where the Murrah building stood. 168 empty chairs recall those who died. Amongst the 168 chairs, smaller chairs commemorate the 19 children killed, 15 in the same day-care center. The chairs are lined in nine rows, symbolizing the 9 floors of the building.

Ten years after the bombing Chris Fields has gone from Capt. to Major and is the acting battalion chief with the fire department. The memories don’t bother him but he dreads having to go through it again.
Aren is now married with two kids, Bella and Broox, both of who know about their famous half-sister. After Baylee’s limb body appeared on TVs across the world, letters started to flow in from everywhere. Many only had “the mother of the baby in the firefighter’s arms” as the address. There was poetry, letters, cards but most had one thing in common, money. Aren used the donations to get her life in order to buy a house and a car but some of the very first donations she used to set up a group called Protecting People First Foundation (PPFF). Since the beginning PPFF’s mission has stayed the same, to raise awareness about the deadly effects of flying glass caused by a terrorist attack or natural disaster. After the Sept. 11 attack on the Pentagon, workers thanked her because the protective glass helped save lives.

On April 18, 2005, the family celebrated what would have been Baylee’s 11th birthday. The cake and party favors are for her kids. They still have the party every year and the kids know the next day they’ll go to the Oklahoma City National Memorial and lay a wreath on the little chair that bears her name.
Oklahoma Natural Gas didn’t stop with firing Lester and on October 5, 1995, sued to claim copyright ownership of the photos. Oklahoma Natural Gas won. The court’s denied Lester’s appeals and Lester was forced to give up copyright ownership and pay statutory damages in the sum of $34,623.50.
Charles Porter’s picture went onto win the 1996 Pulitzer Prize. After the bombing Charles quit his job, moving to a collection agency but not happy there, he left that too. He worked odd jobs, and sometimes he got work as a wedding photographer. Brides had no idea their discount photographer was a Pulitzer Prize winner. Eventually, he went back to school and found his destiny – a degree in physical therapy. The Pulitzer he received for his picture is somewhere in his attic in a box. “My life,” Porter says, “is not defined by that one picture.”