In the wake of JFK’s assassination, people around the world mourned and tried to come to terms with John F. Kennedy’s death. Many found solace in the stoic Kennedy clan. Lead by the dignified and unbreakable Jackie Kennedy following the family adage of “Kennedy’s don’t cry,” people ached for her as she and the Kennedy family refused to break down. The youngest member of the Kennedy family three-year-old, John F Kennedy Jr. or John-John was no exception. As the casket left St. Matthew’s Cathedral on its way to the President’s final resting place JFK Jr. stepped forward and raised his small hand in salute, an image that broke the hearts of millions.

The President has been killed

At 1:00 p.m. on Friday, November 22, 1963, John F Kennedy was declared dead at the Dallas Parkland Hospital. Vice President Lyndon Johnson was then the President of the United States. With no knowledge of who was behind the assassination, secret service agents wanted to get the now President Johnson out of Dallas in the case of another assassination attempt. Agents wanted to go to the safety of Washington, but President Johnson refused to leave without Jackie Kennedy and Jackie refused to leave JFK’s body. A comprise was met when it was decided to bring Jackie and the President’s body to the capital in Air force One. This plan was almost thwarted by Dallas Police.
At that time there was no federal ruling against killing a President. Therefore it was against the law to remove a murder victim from the jurisdiction of the Dallas Police. Dallas’, Dr. Earl Rose tried to enforce this law and block Kennedy’s body from being moved to Washington without first performing an autopsy in Dallas. He even brought a Judge to back him up. The Secret Service was able to convince everyone that security of the moment trumped everything and the Dallas officials backed down.
Air force One arrived at the Andrews Air Force Base at 6:05 p.m. EST. Jackie Kennedy had refused to clean up or change wanting the media to capture her bloodstained clothes so that the plotters could see what they had done. Lady Bird Johnson who also on Air force One wrote in her diary:

I looked at her. Mrs. Kennedy’s dress was stained with blood. One leg was almost entirely covered with it and her right glove was caked, it was caked with blood – her husband’s blood. Somehow, that was one of the most poignant sights – that immaculate woman exquisitely dressed and caked in blood.

Robert Kennedy met the blood-covered Jackie when the plane landed and together they accompanied Kennedy’s body to the Bethesda Naval Hospital for an autopsy.

JFK arrives at the Whitehouse

On 4:30 a.m. EST Saturday, November 23 President John F. Kennedy returned to the White House for the last time. He was placed in the East Room of the White House which at Jackie’s request had been transformed into a recreation of how it looked when Abraham Lincoln was killed. At 10:00 am there was a private service and then for the rest of that Saturday, government officials were invited to pay their respects to the 35th President. It was decided that the next day the body would be moved to The Capitol Rotunda the large dome-like structure that is seen as the center of Washington.
On Sunday the 24th, the President was moved by horse-drawn carriage to the Capitol Rotunda. It was the same carriage that had carried the body of former President Franklin D. Roosevelt. As per military tradition a riderless horse, ironically nicknamed Black Jack, was part of the procession with boots placed backward in the stirrups. After a number of Eulogies by government officials, the Rotunda was opened up to Public viewing. Until 9:00 AM the next day about 250,000 people waited in line, some for waiting for up to 10hrs, to walk past and pay their respect to the President.

One of Lyndon Johnson’s first acts as President was to declare Monday, November 25 as an official day of mourning. At 8:25 that day the doors to the Rotunda were closed locking out about 10,000 people still trying to get in to pay their respects. President Kennedy had never planned a funeral and so planning duties were taken over by the Military District of Washington (MDW) in consultation with the president’s brother-in-law, Sargent Shriver, and a presidential aide. The plan was to have Kennedy’s casket moved from the Capitol Rotunda to the White House to St. Matthew’s Cathedral and then on to the President’s final resting place in Arlington National Cemetery. Almost 1,000,000 people turned up to watch the procession with millions more watching on TV that was broadcast to over 23 countries around the world.
On Mon the procession finished the first leg of its journey when it reached the White House. From the White House, the funeral continued on foot to the Cathedral led by Jackie and close members of the Kennedy family followed by over 220 foreign dignitaries. They included 19 heads of state, various high-ranking government representatives including officials from the Soviet Union and members of various royal families. The last time so many presidents, prime ministers, and royalty attended a state funeral was to pay their respects to Britain’s King Edward VII in 1910. With so many high-ranking officials, it was a security nightmare for the secret service. As a safety measure Under Secretary of State, George Ball did not attend the funeral as everyone in Washington wanted to pay their respects.

Over 1,200 invited guests attended the service at St. Matthew’s Cathedral presided over by the Archbishop of Boston, Richard Cardinal Cushing. Cushing was a close associate of the Kennedy’s having officiated at their marriage, spoken at JFK’s Presidential Inauguration, and having christened their children. As requested by Mrs. Kennedy the funeral was a low mass, meaning no singing. Instead of reading directly from the bible, it was decided that the reading should be made from selected works of Kennedy’s writing and speeches including the entire Inaugural Address. At her request, Secret Service Agent Clint Hill the agent who is seen climbing onto the limousine in Dallas sat directly behind her in the church.

For JFK Jr. Mon November 25, 1963, started out with his nanny, Maude Shaw, and sister Caroline singing “Happy Birthday” to him. The day that the nation buried his father was also his third birthday. While his mother and the Kennedy clan led the procession to the church John-John and his sister trailed behind in the limo. After the service, Jackie standing with Caroline and John-John and close Kennedy members witnessed the casket being carried out of the church. It was here that TV coverage, and photographers, caught an emotional scene as Mrs. Kennedy whispered to JFK Jr. who then stepped forward and gave his best three-year-old salute to his father.

I was chosen to walk with Jackie and the world leaders from the White House to St. Matthew’s for the JFK service. When we got there I had to go behind the ropes with the other 70-odd photographers. All squeezed in an area for 30. Wow! UPI photographer Frank Cancellare squeezed me in next to him…. I had the longest lens, a 200mm. … I just watched Jackie. She bent down and whispered in [John-John’s] ear. His hand came up to a salute. Click! One exposure on a roll of 36 exposures.

Stan Stearns was working as a UPI photographer when he took his famous shot of JFK Jr. In 1970 he retired from news photography and started a lucrative career as a wedding and portraits. 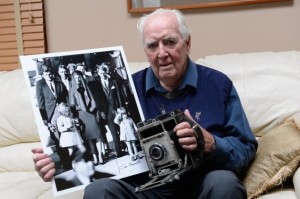 Dan Farrell, of Long Island, holds another historic photo taken from a different angle that he took for the New York Daily News

Decades later an ailing White House photographer Joe O’Donnell sparked a controversy when he claimed that he took the Stearn’s shot. Further investigation by the New York Times determined that O’Donnell had claimed not only Stearn’s picture but pictures from a wide range of famous photographers.

The funeral procession of a long line of black limousines to Arlington cemetery took over an hour to arrive. At 3:34p.m. JFK’s body was laid to rest. After the burial service, the widow Kennedy lit the eternal flame over his grave that has burnt continuously to this day. She had gotten the idea of a symbolic flame from the memorial to the Unknown Soldier at the Arc de Triomphe in Paris. On Dec 4, Patrick Bouvier Kennedy who had died shortly after birth on Aug 9, 1963, and his stillborn sister, Arabella, were reinterred alongside their father. At 64 on May 19, 1994, Jacqueline Bouvier Kennedy Onassis the woman who had gained so much respect for her strength during those four days in November died due to complications from lymphoma. On May 23 she was buried underneath the eternal flame, beside her husband.

AP Images handles the copyright for this image.