The United States National Archives and Records Administration (NARA) is an independent agency of the American government charged with maintaining historical records. NARA stores millions of government records some classified and some because they were created by employees of the federal government are in the public domain. The agency receives requests from the general public for specific photos out of the millions they have in its care. In 2004 Prologue Magazine did a story on the most requested photos from NARA. Creating an accurate list is near impossible as the number of ways to request a photo is difficult to track. Also, NARA facilities are spread out throughout the country so each district building might have a different top ten. However, most photos are held at the Special Media Archives Services Division, at the National Archives facility in College Park, Maryland. Prologue asked the Maryland branch’s reference team to come up with what they think are the top ten most requested photos and after a brainstorming came up with the pictures listed below. Some have already been covered by this site and others for various reasons either haven’t been written about or weren’t deemed iconic. So I give you the Top Ten (plus one) requested photos from NARA:

Nowadays meeting between cultural icons and political leaders is an everyday occurrence with Bono getting access to the UN seemingly whenever he wants. In the ’70s suggesting that Elvis, the King of Rock and Roll, and Richard Nixon, the American President could have a get together would have been met with disbelief. Yet on Dec. 21, 1970 it happened and White House photographer, Oliver (Ollie) Atkins, captured the whole event in Black and White glory. The meeting was top secret at the time but almost a year later, on Jan. 27, 1972, the Washington Post broke the story. Soon the photo was released and it quickly became and still is one of the most requested photos from the national archives. READ MORE...

Behind the camera: J. Howard Miller
Where: Miller’s Studio
Photo Summary: A poster put out by the US government to encourage women to head out into the workforce (179-WP-1563)
Picture Taken: 1943

After the bombing of Pearl Harbor by the Japanese, America entered the war. Companies who had been already producing some war material for the Allies switched to full wartime mobilization. As factories stepped up production, they faced an immediate problem, manpower shortages. Men working in the American labor force left by the millions to serve their country in the military. Companies who had just signed lucrative contracts with the government desperately needed workers and they turned to as yet untapped resource, American Women. READ MORE…

Behind the camera: Lt Victor Jorgenson took this shot from a different angle than the more famous Alfred Eisenstaedt pictureNational archive number 80-G-377094Naval Historical Center #520697ARC Identifier (National Archives Identifier) 520697
Where: Times Square, New York City, USA
Photo Summary: Many claim to be the Nurse and Sailor shown in the picture. Former nurses Edith Cullen Shain and Greta Friedman are the most likely Nurses and George Mendonça and Carl Muscarello are the most likely Sailors (80-G-377094)
Picture Taken: August 14, 1945. Victory in Europe day is actually Aug 15, 1945 but news broke out at Times Square on August 14 because of the International date-line and time zone changes

America had been at war for almost 4 years, Germany had finally been knocked out of the conflict three months earlier but Japan still fought on. Finally, after nightly bombing raids and two cities wiped out by Atomic explosions, Imperial Japan surrendered. News travelled like wildfire and on August 14, 1945, America celebrated! One of the most famous pictures of World War II, Alfred Eisenstaedt and Victor Jorgenson captured this moment of revelry at New York’s Time Square. READ MORE…

On June 6, 1944, the largest amphibious invasion in history occurred when the Allies stormed ashore the beaches of Normandy. Chief Photographer’s Mate (CPHOM), Robert F. Sargent, on one of the LCVPs snapped this photo while the American soldiers of Company E, 16th Infantry, 1st Infantry Division (The Big Red One) waded onto the Fox Green section of Omaha Beach. One of the most famous images of D-day is often confused as one of the 11 famous Capa D-day pictures. READ MORE…

Iwo Jima was one of the bloodiest battles in Marine Corps history. Of the 70,000 marines that hit the beach, 6,281 never left alive and a further 19,217 were wounded. Yet more than a quarter of all the Medals of Honor, given to Marines in World War II were for this epic clash. Up to World War II, every generation of Marines had to fight for the Marine Corp’s right to exist. So when the Navy Secretary, James Forrestal saw the first flag raising on Mt Suribachi and knowing the cost in blood to get it there he said to Marine commander, Holland “Howlin’ Mad” Smith “the raising of that flag on Suribachi means a Marine Corps for the next 500 years.” The battle and the greater Pacific campaign is remembered by this photo taken by AP photographer Joe Rosenthal. READ MORE…

As Allied victory over the Nazis seemed imminent the leaders gathered at Yalta, USSR for a conference to decide the shape of post-war Europe. The Allied “Big Three” heads of government: the United States, the United Kingdom, and the Soviet Union—President Franklin D. Roosevelt, Prime Minister Winston Churchill, and General Secretary Joseph Stalin, respectively attended.
Photographers present to record this historic event captured this seemingly causal moment as the Big Three prepared for more formal photos. In addition to the leaders of their countries, many representatives of their armed forces were in attendance. In the background you can see from left to right: 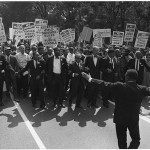 On August 28, 1963, America saw one of the largest marches on Washington in support of civil rights. Called the March on Washington for Jobs and Freedom the protest was organized by a group of civil rights, labor, and religious organizations, under the theme “jobs, and freedom.” Around 250,000 people took part in the protest which ended with Martin Luther King, Jr. giving his famous I Have a Dream speech.

Named after an American Naval officer the USS Shaw (Navy Marking:DD-373) was a Mahan-class destroyer commissioned on September 18, 1936. During the attack on Pearl Harbour the USS-Shaw was in dry dock YFD-3 for scheduled repairs. She took a number of direct hits from Japanese planes that caused extensive damage. The dry dock crew tried to flood the ship to prevent any more fire damage but around 9:30 AM the forward magazine exploded.
After the attack temporary repairs enabled the Shaw to limp back to San Fransisco where she was completely refitted including receiving a new bow as the original had been badly damaged by the explosion shown in the picture. On August 31, 1942, she returned to Hawaii and played a part in a number of Pacific theatre battles before being decommissioned in Philadelphia on October 2, 1945, her name was stricken from the Navy List two days later. Her hulk was scrapped in July 1946. The USS Shaw earned eleven battle stars during World War II. A number of ships were hit that day including the USS Arizona.

Scars of a whipped slave

This image is in the public domain due to its age

During the American Civil War, the Union Army started to create Black Units from Black freemen from the Northern States and escaped slaves from the south. After the Union Army took over Baton Rouge, Louisiana; slaves from the surrounding area started to volunteer for service in the Union Army. One such volunteer was the former slave, Peter (Slaves often had no last name). He posed for the Army War Photo Department telling the photographer: “Overseer Artayou Carrier whipped me. I was two months in bed sore from the whipping. My master come after I was whipped; he discharged the overseer.”

The Snake and the Tetons

Ansel Adam was a famed nature photographer who pioneered a variety of photography development methods such as the “zone system”. The zone was Adam’s unique way of predetermining the final tone of each part of the landscape, it had never been done before and he passed the technique and other photography methods on to photographers around the world via his many “How to photograph” publications. In 1942 while photographing for the National Park Service he took many shots, including this one, of the Grand Teton National Park in Wyoming. This image is so highly viewed that it was one of 115 images placed aboard the Voyager spacecraft to allow alien civilizations to visualize what Earth is like.

In an effort to end the war, and three days after the Hiroshima Atomic bombing, the Americans dropped a nuclear bomb (Equal to the force of 21 kilotons of TNT) on the city of Nagasaki, Japan. The United States Army Air Forces B-29 bomber that dropped the bomb was called the Bockscar (sometimes called Bock’s Car or Bocks Car). The plane was piloted by Maj Charles W. Sweeney and co-pilot Capt Charles Donald Albury. Fat Man Detonated at about 1,800 feet (550 m) the explosion flattened the city and killed outright around 39,000 people, with a further 25,000 injured. Thousands more would soon die from their wounds. READ MORE…