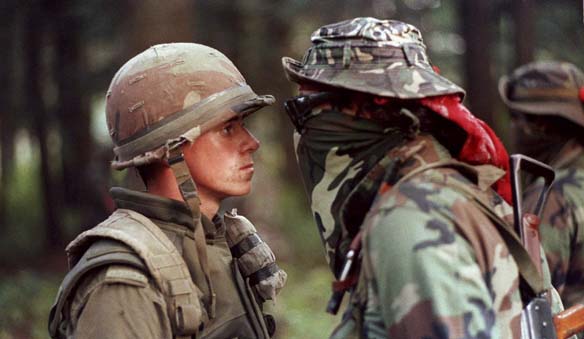 Over three hundred years ago the New France government granted land to the Catholic Sulpician seminary in 1717. Part of the land, a Mohawk burial ground was reserved for the local Mohawk First Nation. The seminary held the land in trust for the Mohawks but would over the years take full ownership. A military confrontation in 1869 between Mohawks and missionaries over the land had to be put down by local militia. The land remained in dispute even when it was sold by the seminary to private concerns. In 1961, the city had obtained ownership of the land and built a private nine-hole golf course, the Club de golf d’Oka, on a portion of the land. When they wanted to expand the golf course the Mohawks erected barricades to stop construction. A court order ruled on the side of the city and ordered the blockade to be removed. The Mohawk’s refused and on July 11, 1990, a police fast action response team tried to drive off Mohawk activists using tear gas canisters and flash bang grenades. In the confusion, someone opened fire and a 15-minute bullet exchange ensued forcing the police to fall back, abandoning six police cruisers and a bulldozer. During the firefight, 31-year-old SQ Corporal Marcel Lemay was shot in the face and died a short while later.

Shaney Komulainen didn’t get into the Mohawk enclosure before it was closed off by the military. Arriving late she had to sneak into the encampment through military lines:

The siege ended on September 26 and as the people in the Mohawk enclosure left their camp Komulainen was arrested, handcuffed, strip-searched and held by the Quebec police for five hours. The next January Komulainen was involved in a near fatal car crash that left her with a broken arm and two broken legs. While she was recovering in the hospital she learned that the police were laying charges against her including, “possession of a weapon or an imitation of a weapon, threatening and interfering with the work of a peace agent, and participating in a riot,” later in the year she was found “Not Guilty”. To make matters worse her car accident prevented her from working and she returned to school studying journalism and social work. Years later she had recovered enough to return to photography.

Other pictures of Protest and Civil Unrest