Behind the camera: Will Counts
Where: Outside the Little Rock Central High School
Photo Summary: Elizabeth Eckford followed by an angry mob. Mary Ann is on the far left. Olen Spann is wearing the hat Sammie Dean, in the dark dress is turning to talk to her father. Hazel Bryan is the one shouting ‘Go home, n#$ger! Go back to Africa!’ Standing behind Hazel is Lonnie Ward, the man with the unbuttoned V-neck is unknown but man with the striped shirt partially blocked by Elizabeth is Richard Stinnett. To the right of the image the woman and man with the camera are unknown
Picture Taken: September 4, 1957

On September 4, 1957, Elizabeth Eckford put on her new dress, made by her, and made her way to Little Rock Central High School. The 4th was to be her first class and her and 8 other Black children were to be the first African-Americans in the school of 2000 white students. She was excited to start classes but as she approached the school she saw a huge crowd protesting her presence. As she approached the school National Guard men, again and again, refused to allow her past them and so she turned to leave but was immediately surrounded by an angry white mob who shouted obscenities as she disparately tried to navigate through the crowd. As she walked in terror photographer Will Counts snapped this iconic image of her. 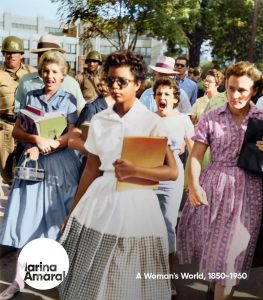 Three years earlier the American Supreme Court handed down Brown v. Board of Education, the landmark 1954 decision to integrate the South’s school system. Days later the Little Rock school board said it would comply but by 1957 it was still stalling efforts to enroll black students in white schools. On September 3, 1957, federal judges ordered the State to begin desegregation and that night the director of the Arkansas chapter of the N.A.A.C.P., Daisy Bates called the nine black students the group had chosen to be “strong enough to survive the ordeal but placid enough not to make trouble” to come to her house the next day. Then from her house, they would go as a group to the school. Eckford, one of the nine, didn’t have a phone and so never got the notice to meet and Bates’ house.

However, events were moving against the nine as the Governor seeking to thwart any effort of desegregation had called in the National Guard and had them ring the school. Publicly he said that they were there to prevent any violence but they were really present to stop the Black children from entering school grounds.

The next day Elizabeth Eckford boarded the bus that took her downtown to the Little Rock Central High School. Getting off at 12th and park she walked toward the school. Guards at the entrance denied her access and then the crowd of several hundred angry white protesters saw her and someone in the crowd shouted out at her to go home. She tried three more times to enter the school each time blocked by the rifles of the National Guard. In Daisy Bates’ book The Long Shadow of Little Rock: A Memoir

she interviewed Eckford who recalls:

For a moment all I could hear was the shuffling of their feet. Then someone shouted, ‘Here she comes, get ready!’ I moved away from the crowd on the sidewalk and into the street. If the mob came at me I could then cross back over so the guards could protect me.
The crowd moved in closer and then began to follow me, calling me names. I still wasn’t afraid. Just a little bit nervous. Then my knees started to shake all of a sudden and I wondered whether I could make it to the center entrance a block away. It was the longest block I ever walked in my whole life.

By now over 250 angry protesters were shouting racial epitaphs and calling for her to be lynched to the nearest tree. Looking just to escape she walked towards the next bus stop down the block hoping the crowd would let her get on board. One of the most aggressive of the crowd was a student of Central High, Hazel Bryan. Hazel was there with her friends Mary Ann Burleson (girl on the far left with the purse) and Sammie Dean Parker (dark dress with head turned). Mary Ann and Sammie Dean were just enjoying the action but to Hazel, she felt that chasing Eckford away was her moral duty! Benjamin Fine another photographer there recording the scene remembers that she was “screaming, just hysterical!”

Finally, she reached the bus stop and sat down on the bench. Reporters formed an informal ring to protect her from the mob one Robert Schakne of CBS News tried to interview her but she refused to speak. Finally, after 35min sitting and taking the verbal abuse the bus came and she went right to her mother’s work where she collapsed into her arms.

The next day Eckford for the first time went to N.A.A.C.P. director Daisy Bates’ house and laid into the woman “Why did you forget me?” Bates would later recall the “cold hatred” directed at her from Eckford’s eyes. For two weeks the nine black students who were supposed to enter the school stayed at home waiting their fate. Meanwhile, Elizabeth’s picture flashed around the world showing up in Papers everywhere from Moscow to the Vatican. Eckford got letters, calls and well wishes from people as far away as Japan.

Two weeks later another date was set on September 23. This time all the Black students assembled at Bates’ house and they moved as a group to the school. This time there were able to get in easily as the mob was distracted by some whites beating on a group of black reporters.

Even though the students had finally gained entry their battle wasn’t over. Every day the faced harassment, no more so that Eckford who as school records revealed was attacked almost every day before she just stopped reporting them. The Black nine though stuck it out but the white establishment fought back by shutting down the school rather than have more blacks join and for the 1958/59 school year it was closed. Eckford was forced to flee the city to St Louis to finish her high school.
[midgoogle]

While at the segregated Horace Mann Junior High School Elizabeth was a rapid reader and got good grades. She was already something of a loner before she went through the incredibly emotionally draining events Little Rock. After the incident, she was withdrawn and lived her something of hermit life. After spending 5-years in the army she returned to Little Rock having two children and suffering severe depression. She avoided speeches and anniversaries about the incident and when she did speak she would have a bag ready in case she threw up or she would come down with panic attacks and forced to leave suddenly. Through a successful medication routine, she was able to get a handle on her depression which had a long history in her family.

Elizabeth suffered further tragedy when in 2003 her son Erin Eckford at the age 26 was shot down by police after refusing to drop his assault weapon. Erin had inherited his families mental sickness and Elizabeth feared that his death was “suicide by police”. The officers involved were later cleared in the shooting.

The picture joined the two girls together and they would find that their lives would be synced for the rest of their days. In 1963 Hazel had an epiphany and renounced her racist ways even calling Elizabeth Eckford on the phone and apologizing. Eckford accepted it and even became sort of protective of her. For decades they didn’t talk but as the racial crisis faded Hazel began to seek out Eckford in an effort to seek some sort of repentance. The two even took a picture together in front of the school in 1997, again by Will Counts. Again in the limelight, Hazel seemed to enjoy her newfound celebrity much to the chagrin of Eckford. In Sept 2007 Vanity Fair did an exhaustive, in-depth story about their on and off again relationship

Counts was born in America’s south and worked as a photographer-editor for The Arkansas Democrat in Little Rock and for The Associated Press in Chicago and Indianapolis. His 1957 iconic image of Elizabeth Eckford at Little Rock

was nominated for the Pulitzer Prize for photographs in 1957 and it was “named by The Associated Press as one of the top 100 photographs of the 20th century.”

He went back to College to earn an education degree before returning to get his master’s and doctoral degrees from Indiana University. He taught at Indiana University for 32 years, retiring in 1995. He also wrote a few books including The Magnificent 92 Indiana Courthouses, Revised Edition

and A Life Is More Than a Moment, 50th Anniversary: The Desegregation of Little Rock’s Central High