Behind the camera: J. Howard Miller
Where: Miller’s Studio
Photo Summary: A poster put out by the US government to encourage women to head out into the workforce
Picture Taken: 1943

This image is in the public domain because it was taken by a federal employee, J. Howard Miller

While other girls attend their fav’rite cocktail bar
Sippin’ dry martinis, munchin’ caviar
There’s a girl who’s really puttin’ them to shame
Rosie – is her name
All the day long, whether rain or shine
She’s a part of the Assembly Line
She’s makin’ history, workin’ for Victory
Rosie! The Riveter

After the bombing of Pearl Harbor by the Japanese, America entered the war. Companies who had been already producing some war material for the Allies switched to full wartime mobilization. As factories stepped up production, they faced an immediate problem, manpower shortages. Men working in the American labor force left by the millions to serve their country in the military. Companies who had just signed lucrative contracts with the government desperately needed workers and they turned to as yet untapped resource, American Women.

Women in the Workforce

Women in the workforce were not a new thing, especially for minorities and the poor. These working women though were mostly restricted to the traditional female professions. The attitudes of the time placed the ideal role of a woman as a homemaker raising the kids. Compounding this way of thinking was the high unemployment during the Depression. Most saw women in the workforce as taking jobs from unemployed men. The American government seeing that it would have to smash these mind-sets launched a media campaign to get women into the labor force.

[bigquote quote=”Do the job he left behind” author=” American government slogan”]
With slogans like, “Do the job he left behind” or “The more women at work, the sooner we will win”, the government launched a media blitz intended to get more ladies into the factories. The “US Office of War information” even put out a “Magazine war guide” for publishers. It had ideas, slogans, and information on how to recruit women workers. Publishers were told to write articles depicting work as glamorous, with high pay but most of all emphasizing patriotism, doing all you can do. Articles soon appeared talking about how because of the war it would not reflect poorly on the man that he was not the sole moneymaker, that a family with a working wife was a patriotic family. Posters and ads of the time also stressed that the female in the factories scenario was temporary, to allay the fear that women were taking Men’s jobs. While making more money was also pressed as a plus, the government warned that the more money coming in shouldn’t be overemphasized or else women might go crazy with spending and cause inflation.

Part of the campaign was a series of propaganda posters encouraging all Americans to buckle down and do their part. An example of this was a poster created by Westinghouse War Production Co-Ordinating Committee artist J. Howard Miller. It was simply entitled “We Can Do it”. He based the poster on a United Press International (UPI) picture taken of Geraldine Doyle working at a factory. At the time of the poster’s release, the woman pictured wasn’t named Rosie. The Rosie name came later when a popular patriotic song called “Rosie the Riveter” was released. The song was written by Redd Evans and John Jacob Loeb and recorded by big band leader Kay Kyser. The name Rosie still wasn’t cemented as a household name until the Norman Rockwell Cover on the Saturday Evening Post came out.

Recent research has been done on the purpose behind the “We Can Do it” poster. While modern culture has assigned the poster a symbol of women’s rights the original purpose may have been much different. Analysis by Gwen Sharp and Lisa Wade have put forward the theory that the poster wasn’t created to be a feminist symbol rather it was a short run poster hoping to promote management and prevent strike action. They note that the poster has instructions in the bottom left corner telling to hang the poster from Feb 15 to Feb 28 [1943]. Also, a small company badge on her shirt collar is noticeable, so rather than being a poster for the general public Sharp and Wade claim that it was an internal poster for employees that already worked for the company not a call-up for more women from the general public.

the message wasn’t designed to empower workers, female or otherwise; it was meant, as were the other posters in the series, to control Westinghouse’s workforce … Images of happy workers expressing support for the war effort and praising workers’ abilities served as propaganda meant to persuade workers to identify themselves, management, and Westinghouse itself as a unified team with similar interests and goals … Kimble and Olson write: “…by addressing workers as ‘we,’ the pronoun obfuscated sharp controversies within labor over communism, red-baiting, discrimination, and other heartfelt sources of divisiveness.” Indeed, the authors note that such measures were effective, since “patriotism could be invoked to circumvent strikes and characterize workers’ unrest as unAmerican.” Today, we see the poster through a lens shaped by what came later, particularly Second Wave feminism.
–Gwen Sharp and Lisa Wade 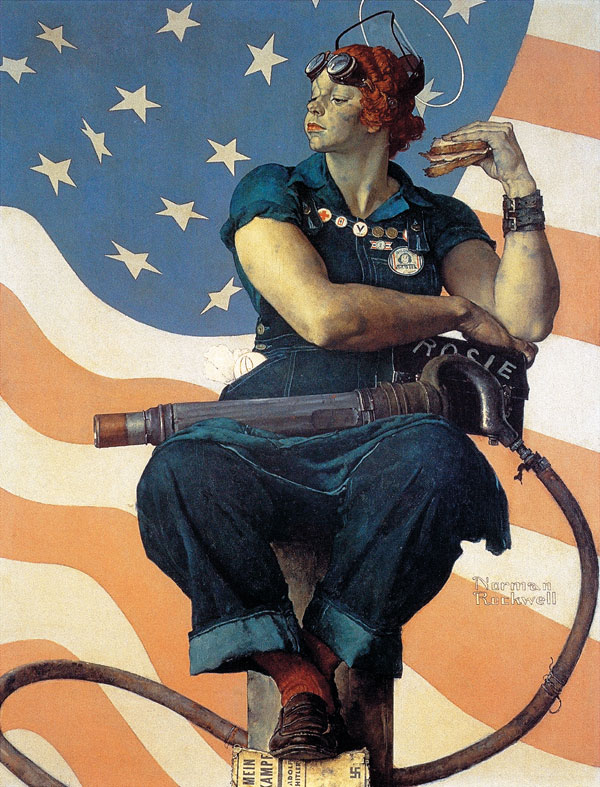 The May 29, 1943, edition featured Rockwell’s take on women doing their part for the war effort. Rockwell painted a statuesque factory worker named Rosie who contemplating the greater things in life while eating lunch is crushing a copy of Mein Kempf under her feet. Rockwell based the image on Michelangelo’s depiction of the prophet Isaiah in the Sistine Chapel. Like many of his painting, he used a model from Arlington, Vermont the small town where he spent most of his time. The 19-year-old telephone operator, Mary Doyle (later Married as Mary Keefe) posed for the picture and was quite surprised when Rockwell turned her small frame into the muscled Rosie seen on the cover.

The popular Rockwell cover and hit song prompted the government to launch a campaign promoting the fictional character of “Rosie the Riveter”. Rosie was seen as the ideal woman worker: loyal, efficient, patriotic, and pretty. Media were encouraged to go along and soon they started to find their own real-life Roses. One such Rosie was Rose Hicker, who with her rivet partner was reported to have broken a record for driving rivets into a Grumman “Avenger” Bomber at the Eastern Aircraft Company in Tarrytown, New York. Hollywood star Walter Pidgeon discovered his own Rosie when touring the FORD Willow Run Aircraft Factory in Michigan. He found a Rose Monroe riveting plane parts together, he quickly had her moved from the factory floor to the film stage, playing herself riveting in war bond films.

The similarities between the “We can do it!” poster and the Rockwell cover ensured that both women were labelled as Rosie. Soon every woman in the workforce was referred to as Rosie. Women who worked in the factories during World War II are still called Rosies. The Miller poster and Rockwell’s cover were seen as the ideal Rosie and each had a huge demand. Yet, Rockwell’s cover was copyrighted which slowed reproduction. Miller’s poster had no restrictions and it was soon on everything, as everybody wanted to show their support for Rosie. The Rockwell cover, while it had helped create the Rosie legend, slowly faded from view and Miller’s “We can do it” poster, rechristened Rosie the Riveter became the image everyone remembers.

Millions of women took up the call to fill the factory the floor’s vacated by the men during World War II. It became so hard to find women to do traditional jobs that many companies had to shut down, for example, some 600 hundred laundries were forced to close due to lack of workers. While women enjoyed the independence and money their jobs brought, after the war as the men started to return home most left or were forced from their jobs. They went either back into the home or into traditional female employment roles but not all left, as after World War II women in the workforce would never dip below pre-war levels.

For decades Geraldine Doyle, born July 31, 1924, was thought of a woman who inspired Miller’s poster. She has toured the country signing Rosie the Riveter posters. She didn’t make the claim she was Rosie until the 1980s when she found the picture in a 1942 Modern Maturity Magazine. Only 17 when she took the job at a metal pressing plant near Ann Arbor, Michigan she quit after only two weeks upon finding out that another woman had badly injured her hand doing the same job. Doyle loved to play the cello and was worried that the job might cripple her. In 1992 the U.S. Postal service created a stamp with Rosie’s Image. Geraldine Doyle died on December 26, 2010, from complications of her arthritis. Her daughter Stephanie Gregg said that Doyle was quick to correct people who thought she was the original women worker. “She would say that she was the ‘We Can Do It!” girl,” Gregg said. “She never wanted to take anything away from all the Rosie the Riveters who were doing the riveting.” 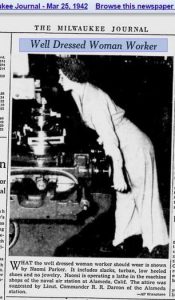 The image that started it all

When Doyle died in 2010 associate professor of communication at Seton Hall University in New Jersey James Kimble began to see holes in her claim to be the woman who inspired the poster. Central to the identity of Rossie is an uncaptioned photo that is claimed to have inspired J. Howard Miller. After years of research, in 2015, he made a breakthrough when he found a series of photos with the caption that listed the woman in the photo as Naomi Parker Fraley.

Pretty Naomi Parker looks like she might catch her nose in the turret lathe she is operating, [The women wore] safety clothes instead of feminine frills … And the girls don’t mind – they’re doing their part. Glamour is secondary these days.

Naomi Parker Fraley was born in Tulsa, Oklahoma in August 1921 to mining engineer Joseph Parker and his wife Esther. Eventually, they had eight children and moved throughout the country following mine work. After America joined WWII 20-year-old Naomi got a job at the Naval Air Station in Alameda with her sister Ada. It was there that a photographer took her picture. She didn’t make the connection until 2011 when she saw learned that the picture was the inspiration of the poster. No one would listen to her claims until Professor Kimble tracked her down to her home in California. When they went public the Omaha World-Herald asked how it felt to finally be known as the real Rosie she shouted through the phone “Victory! Victory! Victory!”

Mrs. Fraley’s first marriage, to Joseph Blankenship, resulted in a son Joseph Blankenship but the marriage ended in divorce. She got married again but her second husband, John Muhlig, died in 1971. Her third husband, Charles Fraley, died in 1998 after 19 years of marriage. On January 20, 2018, Naomi Parker Fraley herself died while living with her sister.

In 2016 in an interview with People Magazine she said: “The women of this country these days need some icons, If they think I’m one, I’m happy.”