This image is in the public domain because it was taken by a federal employee, Oliver F. Atkins

Nowadays meeting between cultural icons and political leaders is an everyday occurrence with Bono getting access to the UN seemingly whenever he wants. In the ’70s suggesting that Elvis, the King of Rock and Roll, and Richard Nixon, the American President could have a get together would have been met with disbelief. Yet on December 21, 1970 it happened and White House photographer, Oliver (Ollie) Atkins, captured the whole event in Black and White glory. The meeting was top secret at the time but almost a year later, on Jan. 27, 1972, the Washington Post broke the story. Soon the photo was released and it quickly became and still is one of the most requested photos from the national archives. 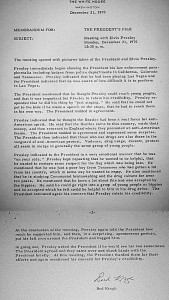 On the morning of December 21, 1970, a limo pulled up to the White House and one of Elvis’s bodyguards handed over a letter asking for a meeting with President Nixon. The five-page letter was written on American Airlines stationery and requested a meeting with the president to talk about Elvis obtaining the credentials of a federal agent in the war on drugs. Secret Service agents alerted Egil (Bud) Krogh, Nixon’s then-deputy assistant for domestic affairs, who was able to talk to the right people to get a meeting with the President. The time was set for 12:30 and at 11:45 Elvis was at the White House northwest gate. Krogh met Elvis and his two bodyguards, Sonny West and Jerry Schilling, and escorted them to the Oval Office reception area. Bud remembers being a little shocked when Elvis showed up wearing his rock star gear and not the usual business suits that the “normal” visiting world leaders wore. He was still impressed, though:

… in his own rock star way, he was resplendent. He was wearing tight-fitting dark velvet pants, a white silky shirt with very high collars and open to below his chest, a dark purple velvet cape, a gold medallion, and heavy silver-plated amber-tinted designer sunglasses with “EP” built into the nose bridge. Around his waist was a belt with a huge four-inch by six-inch gold belt buckle with a complex design I couldn’t make out without embarrassing myself. . . This was a time in sartorial history when gold chains festooned the necks of many of the more style-conscious men in our society. — Bud Krogh 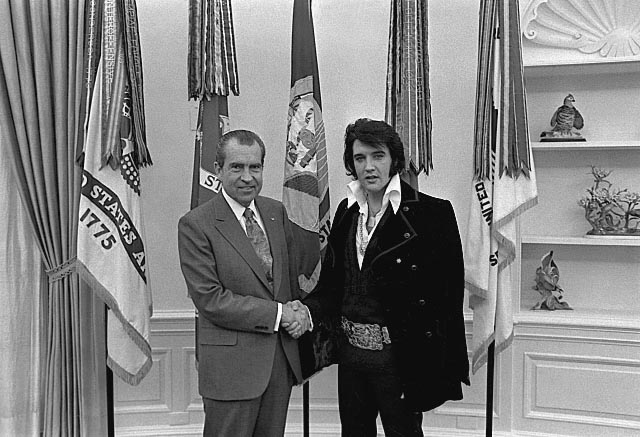 The national archives have a travelling exhibit of the Elvis and Nixon meeting and some of the items they display are Elvis and Nixon’s clothes. In addition to the huge gold plated belt buckle, they have Elvis’s black velvet overcoat and black leather boots. For Nixon, they have the gray woollen suit, tie, and the size 11½ black shoes.

This was one of many pictures taken by Oliver Atkins, for more pictures go to the photo gallery of the meeting. Elvis had actually requested the meeting because, ironically, he was concerned about America’s drug problem: 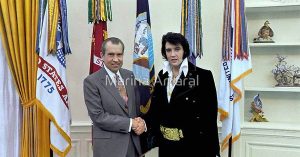 Nixon and Elvis colorized by the talented Marina Amaral ( @marinamaral2 )

I have done an in-depth study of drug abuse and Communist brainwashing techniques and I am right in the middle of the whole thing where I can and will do the most good … The drug culture, the hippie elements, the SDS, Black Panthers, etc. do NOT consider me as their enemy or as they call it The Establishment. I call it America and I love it. Sir, I can and will be of any service that I can to help The Country out. I have no concern or Motives other than helping the country out.
So I wish not to be given a title or an appointed position. I can and will do more good if I were made a Federal Agent at Large and I will help out by doing it my way through my communications with people of all ages. — Elvis’s Letter to the President

In less than seven years Elvis would die at the age of 42 from prescription drug abuse and heart disease (although he never officially sought any sort of drug addiction help) As shown in his letter, Elvis was trying to gain an official title and badge. While he usually carried himself with the confidence that the KING of rock roll would Krogh remembers that even Elvis was awed by being in the Oval Office, “I think he was just awed by where he found himself. I ended up having to help him walk across over to the president’s desk. 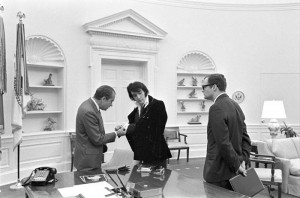 Nixon is admiring the cufflinks given to Elvis by Vice-President, Spiro Agnew.

Elvis brought a number of things to the meeting including other badges and credentials from other drug agencies, some pictures of his daughter and a present for Mr. Nixon, a World War II-era Colt 45. (The gun is now on display at the Richard Nixon Library) Nixon politely heard out Elvis’s case and did end up giving him the badge he asked for.
In a summary of the meeting created by Krogh for the President, he noticed that Elvis seemed quite emotional about being on Nixon’s side. He also expressed his concern about how the Beatles were a bad influence on the country. In the meeting summary, Krogh wrote that Elvis said that the Beatles came “to this country, made their money, and then returned to England where they promoted an anti-American theme. The President nodded in agreement and expressed some surprise.”

As the 30min was about to wrap up Elvis in a spontaneous moment gave Nixon a hug and told him how much he supported him. Just before he was about to leave Elvis asked if it would be OK if Nixon could meet his bodyguards, which Nixon agree to do. 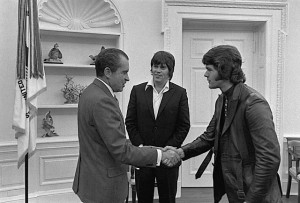 Nixon meeting Elvis's bodyguards, Sonny West on the left and Jerry Schilling on the right

Years later Krogh would look back and recall that Elvis had probably just wanted the badge to complete his collection, “Oh man, we were set up! But it was fun, said Krogh. “He said all the right words about trying to do the right thing and I took him at his word, but I think he clearly wanted to get a badge and he knew the only way he was going to get it.

The Flags Behind the King and President

In the background, you can see the Oval office’s military service flags from each division of the Armed Forces. From left to right are the US Indoor/Parade versions of the Army, Marines, Navy, AirForce, and US Coast Guard. Below are the flags as they appear stretched out, note that the oval office flags are the indoor parade versions and as such have gold tassels surrounding them. 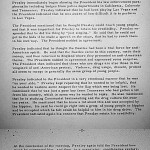 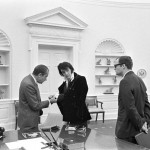 Nixon is admiring the cuff links given to Elvis by Vice-President, Spiro Agnew. 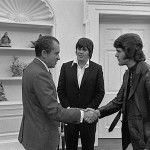 Nixon meeting Elvis’s bodyguards, Sonny West on the left and Jerry Schilling on the right 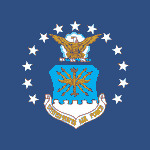 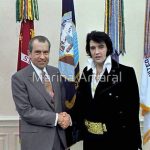 Nixon and Elvis colorized by the talented Marina Amaral @marinamaral2