Behind the camera: H.S. ‘Newsreel’ Wong, also known as Wong Hai-Sheng or Wang Xiaoting. News footage was taken with Eyemo newsreel camera, this photograph was taken with his Leica camera.
Where: Platform of the Shanghai South Railway Station
Photo Summary: A crying baby sitting in the ruins of a bombed out train station
Picture Taken: August 28, 1937

This image is in the public domain

During an aggressive bombing raid on Shanghai by the Imperial Japanese army in 1937 untold thousands of Chinese civilians died and the city was largely destroyed. Photographer H.S. “Newsreel” Wong took the iconic photo “Bloody Saturday” which has also been largely referred to as “The battle of Shanghai baby” photo. This photo went on to be voted one of the top ten pictures of the year by “Life” magazine in 1937 and in 2003 appeared in the Time-life book “100 photographs that changed the World”.


The Battle of Shanghai

In 1937 the Battle of Shanghai was the first of the twenty-two major battles to be fought between the Imperial Japanese army of the Empire of Japan and the National Revolutionary Army of the Republic of China during the Second Sino-Japanese war.
Although air operations commenced on the 14th of August with heavy causalities on both sides, the bloodiest period of the bombing was during the “second phase” of air operations which were conducted from August 23rd to October 26th. It was during this Second phase of combat that the “Bloody Saturday” photo was taken.

H.S. “Newsreel” Wong was a cameraman working for the Hearst Metrotone News. On August 28th, he was gathered with many other reporters and cameramen on top of the Butterfield and Swire building to take photos of a supposed incoming bombing raid. By 3 PM no aircraft had been seen so most of the reporters left. Wong remained, however, and at 4 PM 16 Japanese aircraft emerged and then bombed a group of war refugees at Shanghai’s South Station. Wong left the building and quickly took his car to the Station. According to Wong, the level of gore and death was nearly unfathomable. Walking between the bodies Wong, “noticed that [his] shoes were soaked with blood.” He immediately began filming. Wong then claims that he saw two children on the tracks with a woman he presumed was the babies’ mother. A man came and grabbed one child, moving it to the platform, this is when Wong took the iconic shot of the long child, then the man, presumably the father, returned and took the next child, all the while Wong continued shooting as another wave of Japanese aircraft closed in on the ruined area. Wong was going to take the child with him but another survivor took the children. He was never able to determine if it was a boy or a girl and he never saw them again.

Reaction to the Photo

By the end of 1937, over 140 million people had seen the still black and white image of the child at the station. The photo was used to fan Anti-Japanese sentiment in the United States. It was shown to movie audiences during the new-reels and it was also in newspapers and magazines. It caused Senator George Norris to claim that the Japanese were “disgraceful, ignoble, barbarous, and cruel, even beyond the power of language to describe.” 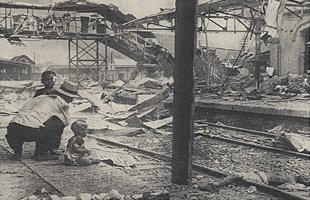 Another picture with brother being placed on the platform

Another picture from the series that shows another child was rescued
Immediately the Japanese called the photo a fake, and a price of 50,000 USD was placed on Wong’s head (The equivalent of US$ 760,000 in 2011). Other photos were taken by Wong at the same show another child in the frame, along with a man. Wong claims this is the man that was moving the children to safety however the Japanese insisted this was his assistant, Taguchi, arranging the children to be more pitiable and hence photogenic. Another account has it that the man in the photo is an aid worker that posed for the photo and some have even alleged that Wong somehow added smoke to the photographs to make the surrounding damage seem more extensive than it was. A secondary photo of the child exists in which the baby is on a medical stretcher being given first aid by a Chinese boy scout and although this would seem to legitimize Wong’s account it is often not included in discussions even to this day.
Photographer

Wong would go on to continue reporting but due to constant death threats from the Japanese, he was forced to take his family and relocate to Hong Kong. After the war, Wong retired to Taipei, Taiwan and died of diabetes at his home at the age of 81 on March 9, 1981.