Behind the camera: Neil Leifer
Where: Central Maine Youth Center in Lewiston, Maine, the state’s second largest city
Photo Summary: Muhammad Ali screaming for Sonny Liston to get up off the ring
Picture Taken: Liston was knocked down 1 minute and 42 seconds into the first round on May 25, 1965

Muhammad Ali vs Sonny Liston title match is still one of the most controversial boxing matches in the world. The second match only lasted 1 and 42 seconds before Muhammad Ali knocked done Liston with what would become known as the “phantom punch”. While Liston laid on the ground Ali stood over him screaming to get up while photographers snapped this now-famous photo of the scene. 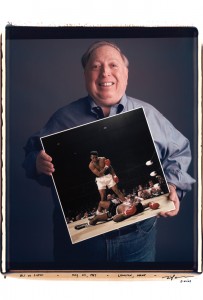 Well, I was lucky. I don’t want to sound like I’m just being modest … The photographer you see between Ali’s legs is Herbie Scharfman, the other Sports Illustrated photographer. It didn’t make a difference how good he was that night. He was obviously in the wrong seat. What the good sports photographer does is when it happens and you’re in the right place, you don’t miss. Whether that’s instinctual or whether it’s just luck, I don’t know.

To capture the color, Leifer had rigged special flash units over the ring, but this led to a bigger challenge: Leifer had one shot. The other photographers brandished the equivalent of semi-automatics whilst he held a sniper rifle. Leifer’s strobes needed time to recharge, which meant he couldn’t click and click. Whenever a fighter fell, the other photographers could quick-twitch their shutters, but Leifer had to pick one moment, artistically aping the sniper’s motto: one shot, one kill.

Nonetheless, Leifer managed the risks and got the great shot—got it, knew it—but couldn’t get it to stick. Not in the minds of his editors, at least. Eventually, many months after that issue of Sports Illustrated had been consigned to the stacks, an editor espied the image again and thought it worth consideration. He submitted it to the prestigious “Pictures of the Year” contest—the Oscars for photographers. But there, too, the photo failed. What would later be voted as the best sports photo of the century couldn’t conjure an honorable mention. — Iowa Review:How Things Break

Muhammad Ali (Cassius Marcellus Clay, Jr. on January 17, 1942) was born in Louisville, Kentucky. He was named after his father, Cassius Marcellus Clay, Sr and would grow to stand 6’3″ (1.91 m) tall. It wasn’t until March 6, 1964, Malcolm X when Elijah Muhammad the leader of the Nation of Islam stated that Cassius Clay was to be renamed Muhammad (the prophet of Islam) Ali (fourth rightly guided caliph). As an amateur Clay won boxing gold at the 1960 Rome Olympics. Turning pro he won his first fight against Tunney Hunsaker in Louisville, October 29, 1960. Over the next three years, he defeated a string of boxers including, Tony Esperti, Jim Robinson, Donnie Fleeman, Alonzo Johnson, George Logan, Willi Besmanoff, Lamar Clark (who had won his previous 40 bouts by knockout), Doug Jones, and Henry Cooper. By 1963 Clay was ready to take a stab at the World Heavyweight Boxing championship title held by the much-feared Sonny Liston.
Sonny Liston

Charles L. “Sonny” Liston (May 8?, 1932 – December 30?, 1970), was born into incredible poverty of a shareholder farmer family in Johnson Township, St. Francis County, Arkansas. As a young man, he was arrested and sent to jail which he found he actually enjoyed. The food in prison was better than any he had on the outside and while in he was discovered by a prison Chaplin who encouraged and taught him to box. Outside the prison, he soon gained a fearsome reputation as a professional boxer taking the championship title from Floyd Patterson on 25 September 1962. He and everyone in the boxing world expected Liston to crush the fast-talking Clay.

The bout was held on February 25, 1964, in Miami, Florida. Clay launched a physiological campaign against Liston, dubbing him “the big ugly bear” and showing up and taunting him while Liston trained. When the fight opened Liston almost ran across the ring to shut up with his fists the fast-talking Clay. When talking to the press about his strategy for fighting Liston Clay and fellow street-poet Drew Bundini Brown coined the now famous quotes about he would, “float like a butterfly and sting like a bee,” and “Your hands can’t hit what your eyes can’t see.” Which is exactly what Clay did as he slowly tired down Liston while landing a few blows himself. By the third round Clay was in control but in the forth a mysterious substance found its way into Clay’s eyes blinding him. While half blind he was able to avoid Liston’s punishing blows until the burning substance was washed away from Clay’s sweat and tears. Eyes cleared by the fifth round Clay landed a number of combinations and by the sixth Liston seemed pushed to the limit. Then Liston shocked the world when he threw in the towel in 7th claiming to have an injured shoulder and giving Clay the World Heavyweight Boxing championship.

Due to the highly irregular fight where the now Muhammad Ali had won the title the boxing commission scheduled a new fight for 16th of November 1964. Three days before the fight Ali suffered a hernia that required an operation and recovery time so the fight was delayed for six months. During those months was a fire at Ali’s apartment, Malcolm X was assassinated and the Nation of Islam’s offices in New York was bombed. The fight was to be held in Boston either due to fears of an attack on Ali or Liston’s mob connections one Garrett Byrne, on May 5, 1965, filed an injunction to block the fight. When word broke out that Boston was out Sam Michael the director of economic development in the small town of Lewiston, Maine sent word that his town could host it. Lewiston was well off the beaten path of boxing and Sam had to basically build up the fight from scratch. He had to find an arena, print tickets, get the necessary permits, find a ring but he was able to do it even calling the governor to help. By May 7 Sam Michael had everything in order and announced that the title ship match would be held in a small town about 150 miles north of Boston, Lewiston.

With the assassination of Malcolm X and Liston’s mob connections rumors abound that either boxer could be killed that night. The TV broadcasters of the fight, Sports Vision, Inc, put out a $1,000,000 insurance policy in case Ali was murdered and the fight called off. Ali’s camp knew the dangers and security were tight a New York bomb squad was brought in to sweep the building and some 200 extra police brought into search people coming into the arena. Prices soared for tickets and due to the location, security fears, and the hysteria surrounding the fight only 2,434 fans attended the fight.
Ali had changed in many ways since the last fight and so had Liston but where Ali pushed forward Liston seemed to crumble. Black activist Dick Gregory remembered visiting Liston expecting a man of steel eager to retain his title but found a defeated man slumped in front of the TV. He would tell his friends, “his mind is blown. He’s gonna lose fast.”

Gregory couldn’t have been more right as 1min and 40 seconds into the fight Ali threw what would become the “phantom punch” knocking Liston down. The ref, Jersey Joe Walcott, a former world Heavyweight champion himself couldn’t keep Ali in the corner. Ali perhaps confused himself on why Liston was on the ground screamed for Liston to get up. It was at that second that ringside photographers snapped one of the most famous pictures of Ali. It was also in that confusion that the ref forgot to count out Liston. After what was determined to be around 14sec Walcott actually allowed Liston to get up and continue the fight. Ali quickly resumed his beating before a publisher, Nat Fleischer of Ring Magazine started yelling at Walcott that Liston was down on the mat longer than 10sec. So one of the important fights of the time was called not by a ref, ringside judge or boxing official but a journalist who just happened to be there. Walcott quickly separated the boxers and declared Ali the defender and still world heavyweight champion.

Pictures of this famous pose are often confused with another fight of Ali’s February 6, 1967, Muhammad Ali vs Ernie Terrell. Terrell had infuriated Ali by calling him by his former name, Clay. Muhammad Ali pummeled Terrell throughout the fight screaming, “What’s my name, Uncle Tom … What’s my name.” He would beat Terrell unmercifully but hold back from actually knocking him out. Many sports writers at the time said that the fight only went the full 15 rounds because Ali wanted it to. After the fight Sports Illustrated writer, Tex Maule wrote, “It was a wonderful demonstration of boxing skill and a barbarous display of cruelty.”