James Dean’s fate as an iconic movie star would be guaranteed after this photo was published in a 1955 LIFE magazine issue. Only a few months later the star would die in a car crash out west. His image as a rebellious angst-ridden star would be forever sealed by his death. 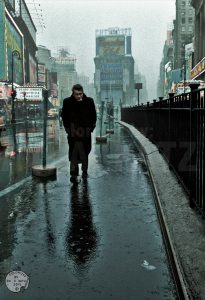 The photographer, Dennis Stock, had met James Dean in New York where the two talked and agreed to work together. Stock was at first hesitant about the shoot. But after Jimmy, Dennis always insisted on calling him James Dean Jimmy, invited him to a sneak premiere to Dean’s film, East of Eden, Stock was sold on the collaboration. In an interview to PBS remembers,

“As was customary in my business, I would solicit an assignment guarantee to cover expenses. The obvious magazine to approach was Life. If I was assigned to the Life editors, we could set up a schedule for visiting Indiana and New York. We further agreed that I would have the first exclusive rights to the picture story on Jimmy.”

Stock also recalled that Dean, perhaps pushing his star power too far, made some conditions on the photoshoot. He wanted a cover guarantee and an agreement that his friend to do the accompanying write-up. Stock recalls,

It was an unusual and highly egocentric gesture. I said I’d pass the request on to the editors. It was a foolhardy demand, which I never conveyed to the magazine, gambling on our growing friendship to keep the assignment afloat. I told Jimmy the editor’s answer was no. For days he acted like a spoiled kid, and then finally came around, making it possible for us to leave for Fairmount the first week in February, 1955.

They went to Fairmount to cover his small town Midwest childhood then went to New York to capture his budding movie stardom. In Fairmount they shot a number of interesting shots including one with a large hog. While Dean was agreeable in his hometown but in New York Dennis found the movie star to be grumpy and difficult to work with. Apparently, the night before the Times Square shot Dean’s insomnia had hit and the idea to take pictures in the cold wet and miserable weather took some convincing by the photographer. The photo essay titled, Moody new star, was published in the March 7, 1955, issue of LIFE magazine. On pg 128 this image was published with the caption:

Walking in Rain, Dean wanders anonymously down the middle of New York’s Times Square. His top-floor garret on Manhattan’s West Side is no more home to him, he says, than the farm in Indiana. But he feels that his continuing attempt to find out just where he belongs is the source of his strength as an actor.

James Dean died at the young age of 24 on September 30, 1955, in a horrible car crash at the junction of highways 46 and 41 in California. His image of a rebel was created in one his most celebrated film, Rebel Without a Cause

. His other two movie roles, loner Cal Trask in East of Eden, and as the surly farmer Jett Rink in Giant only supported this rebel image. Cited as an actor with great talent his death guaranteed that we would only see this side of talent. In death, he was the first actor to receive a posthumous Academy Award nomination for Best Actor and remains the only person to have two posthumous acting nominations.

The New York native Stock joined the navy at the young age of 16 to fight in World War II. After the war, he studied photography and in 1951 won the first prize in the Life young photographers competition. Catching the eye of famed photographer Robert Capa he was invited to become an associate member of Magnum, Stock had early assignments in Paris before he began shooting the Hollywood scene. Over the years he published a number of collections about the American jazz scene. He died on Jan. 11, 2010 from colon cancer in Sarasota, Florida. He was 81.

Copyright to this photo is managed by Magnum: James Dean in Times Square by Dennis Stock