Behind the camera: Alfred Eisenstaedt although Lt Victor Jorgensen took a similar image
Where: Times Square, New York City, USA
Photo Summary: Many claims to be the Nurse and Sailor shown in the picture. Former nurses Edith Cullen Shain and Greta Friedman are the most likely Nurses and George Mendonça and Carl Muscarello are the most likely Sailors.
Picture Taken: August 14, 1945. Victory in Japan day is actually Aug 15, 1945, but news broke out at Times Square on August 14 because of the International date-line and time zone changes.

America had been at war for almost 4 years, Germany had finally been knocked out of the conflict three months earlier but Japan still fought on. Finally, after nightly bombing raids and two cities wiped out by Atomic explosions, Imperial Japan surrendered. News travelled like wild fire and on August 14, 1945, America celebrated! One of the most famous pictures of World War II, Alfred Eisenstaedt captured this image in the revelry at New York’s Time Square. 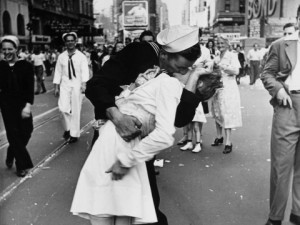 When news broke out of Japan’s surrender Alfred Eisenstaedt ran to Times Square taking pictures as he went. Suddenly he saw a sailor who was “‘running along the street grabbing any and every girl in sight. Whether she was a grandmother, stout, thin, old, didn’t make any difference. None of the pictures that were possible pleased me. Then, suddenly in a flash, I saw something white being grabbed. I turned around and clicked the moment the sailor kissed the nurse … Although I am 92, my brain is 30 years old.’ To prove it he recalled that to shoot that victory kiss he used 1/125 second exposure, aperture between 5.6 and 8 on Kodak Super Double X film.” Eisenstaedt snapped four shots of the kissing couple before moving on to get other pictures. A navy photographer, Lt Victor Jorgensen, was standing very close to Eisenstaedt and took a similar image. As Jorgensen was a federal employee his images are in the public domain while Eisenstaedt’s are copyrighted.

Who is in the Picture?

On that crazy August day, Alfred Eisenstaedt got so caught up in the excitement that was going on in Times Square that he didn’t write down who the sailor and nurse were. Since that day many have stepped forward claiming to be the two in the picture.

Edith Cullen Shain was a Nurse that was taking part in the celebration when she was kissed by a sailor. She said she wasn’t surprised as “at that time in my life everyone was kissing me.” Even though she knew it was herself in the image she didn’t step forward until the late 70s when she saw an article in the LA Times with Eisenstaedt. He was talking about the photo and after reading it she decided to come forward. In the 40s Edith ” didn’t think it was dignified [to be photographed kissing] but times have changed” so she wrote this letter to Eisenstaedt:

Dear Mr, Eisenstaedt:
Now that I’m 60 – it’s fun to admit that I’m the nurse in your famous shot “of the amorous sailor celebrating V.E. Day by kissing a nurse on New York’s Broadway.”
The article in the Los Angles Times, which described your talents, stimiulated the recall of the scene on Broadway. I had left Doctors’ Hospitial and wanted to be part of the celebration but the amorous sailor and a subsequent soldier motivated [me] into the next opening of the subway.
I wish I could have stored that jubulation and amour for use P.R.N. [“P.R.N.” is a medical term meaning “as needed”]
Mr Eisenstaedt, is it possible for me to obtain a print of that picture? I would be most apprecitive. I regret not having meet you on your last trip to Beverly Hills.
Perhaps next time. If not – will understand because “it’s not only hard to catch him … its hard to keep up with him”
Have fun, Fondly,
Edith Shain 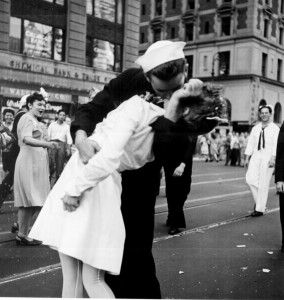 Of all the nurses claiming to be “the one” Eisenstaedt has backed Shain describing her as a “vivacious, lovely woman.”. Shain died at her home on June 20, 2010. She was 91 years old.

Greta Friedman claims the photo is of her but concedes that Shain was probably there, “There’s no doubt that Mrs. Shain was there and got kissed … because every female was grabbed and kissed by men in uniform.” But, says Greta of Frederick, Md., “it definitely is my shape. I used a comb in my hair. I had a purse like the one in the nurse’s hand. I remember being kissed by a sailor, right on Broadway.” Of the women, only Greta is high enough to be the Nurse to Mendonsa’s sailor. She died in 2016 at the age of 92.

In the kissing frenzy in Times Square, Barbara Sokol recalls, she got “an ucky, sloppy kiss” and was wiping her mouth with a handkerchief when up walked another guy who yelled, “‘Gotcha’ I said, ‘No! No! No!’ and when he bent me back I thought, ‘My God, I’m gonna fall'” Barbara a nurse in Derby, Conn. She has always claimed that the Nurse was her and has kept a cut out of the picture framed, “my one claim to fame.” 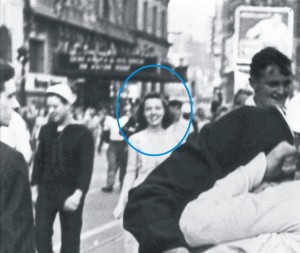 George Mendonsa or George Mendonça, a native of Newport, Rhode Island, was named by the Naval War College in August 2005 as the Sailor in the picture due to some compelling evidence including picture analysis by the Mitsubishi Electric Research Lab (MERL) in Cambridge, MA, matching scars and tattoo spotted by photo experts and the testimony of one Richard M Benson a photo analysis expert and professor of photographic studies plus the former Dean of the School of Arts at Yale University. Mr. Benson has stated that “It is therefore my opinion, based upon a reasonable degree of certainty, that George Mendonsa is the sailor in Mr. Eisenstaedt’s famous photograph.” George, on leave from the USS THE SULLIVANS (DD-537), was watching a movie with his date, future wife Rita Mendonsa, at Radio City Music Hall when the doors opened and people started screaming the war was over. George and Rita took part in the partying on the street but when they couldn’t get into the packed bars decided to walk down the street. It then that George saw a nurse walk by and took her into his arms and kissed her, “I had quite a few drinks that day and I considered her one of the troops–she was a nurse.” In one of the four pictures that Eisenstaedt took you can actually see Rita in the background.

Mr. Mendonsa’s daughter, Sharon Molleur, reported that her father suffered a seizure and died on Sunday, February 17, 2019, after a fall at a care home in Middletown, Rhode Island. He was 95 years old.

Bill Swicegood, Clarence “Bud” Harding, Wallace C. Fowler and others have claimed to be the sailor but none have the evidence that supports Mendonsa’s claim. Even with all the evidence supporting Mendonsa as the sailor ex-NYPD officer, Carl Muscarello still insists that he is the kisser, “I am 100 percent sure. There is no doubt in my mind.” While Muscarello doesn’t have scientific proof behind the claim he does have the backing of the Edith Shain who the photographer, Alfred Eisenstaedt, backed before he passed away. Another supporter of Muscarello was his mother, “When the magazine came out, my mother called me and said I was in LIFE magazine. You couldn’t see my face, but she knew the birthmark on the back of my right hand. She said, ‘Don’t you know you shouldn’t be kissing strange women? You’ll get a disease.’ I said, ‘Mom, the lady’s a nurse.’ She said, ‘They’re the worst kind, always around sick people.’ “. Muscarello who lives down in Florida was recently in the news when he and his son tackled a golf club-wielding home invader who surprised the family while eating breakfast.

As of 1995 LIFE magazine has never identified who was in the picture.

Alfred Eisenstaedt (December 6, 1898, Dirschau, West Prussia (now Tczew, Poland) – August 24, 1995, Jackson Heights, Queens, New York) was a photographer and photojournalist, best remembered for his photograph capturing the celebration of V-J Day. Eisenstaedt immigrated to the United States in 1935, where he lived the rest of his life. Eisenstaedt worked as a photographer for Life magazine from 1936 to 1972. His photos of news events and celebrities, such as Sophia Loren and Ernest Hemingway, were featured on more than 90 Life covers. 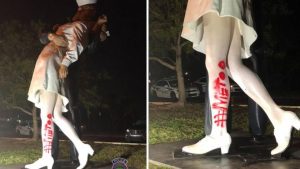 The advent of the #MeToo movement caused society to reevaluate this iconic kiss. After the “Kisser” Mendonsa died a statue of the kiss was vandalized, with someone spraying #MeToo on the nurse’s leg. Several of nurses recall being kissed against their will that day but write it off as being caught up in the moment. BBC reported that “After Ms Zimmer’s death in 2016, her son told the New York Times his mother did not view the kiss negatively.”