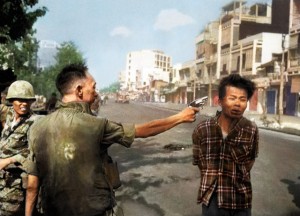 NBC also acquired film footage of the incident, thanks to the South Vietnamese journalist with Adams, Vo Suu, a cameraman for NBC correspondent Howard Tuckner. The color footage of the execution filmed by Vo Suu was shown to a stunned America already shocked by images of a supposed “defeated” on the offensive during the Tet attack.
After the picture and footage flashed across the world there were cries for Loan to be charged with War Crimes for his summary execution of Lem. Loan’s execution would have violated the Geneva Conventions for captured soldiers or Prisoners of War (POWs) if Lem had been wearing a military uniform. Since Lem was caught wearing civilian clothes, a plaid shirt and black shorts, Loan was only restricted by the laws of the South Vietnamese government, which allowed the use of such harsh measures.

General Loan Taken out of Action

The copyright for this image is handled by AP Images.