As the Japanese strike force flew over Pearl Harbor most American service members thought it was nothing more than a drill. It wasn’t until the attack on Pearl Harbor began at 7:53 a.m and the bombs started dropping that people knew it was for real.
Japanese aircraft from six fleet carriers struck the Pacific Fleet as it lay in port at Pearl Harbor, the Japanese pilots had been trained to strike the battleships that were lined up in Harbor. Onboard Arizona, the ship’s air raid alarm went off about 07:55, and the ship went to general quarters soon thereafter. Shortly after 08:00 a bomb dropped by a high-altitude Kate bomber (aka Kate) from the Japanese carrier Kaga hit the side of the #4 turret and glanced off into the deck below and started a small fire but detonated near the officers’ mess incinerating most Arizona’s ranking officers.
A number of bombs and torpedoes hit Arizona. The repair ship USS Vestal was tied up to Arizona so that Arizona itself was between Ford Island to the west and the Vestal and open harbor water to the east. The torpedoes that hit Arizona actually went under the smaller Vestal and exploded under the waterline of the Battleship. Private First Class James Cory who was on Arizona remembered the torpedoes hitting, “you could feel the decks-the compartments-being penetrated just like you could hold a taut piece of cloth or two … separated by you fingers and feel a needle go through them … I don’t know about other people but I thought, ‘Gee, I might get killed!'” 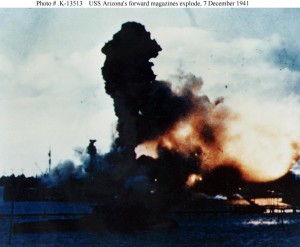 At 08:06 a Kate, from the carrier Hiryū, dropped a bomb, a converted 16.1″ naval shell, that hit between the starboard Turrets #1 & 2. The explosion which destroyed the forward part of Arizona was due to the detonation of the ammunition magazine, located in an armored section under the deck. Most experts seem to agree that the bomb could hardly have pierced the armor. Instead, it seems widely accepted that the black powder magazine (used for aircraft catapults) detonated first, igniting the smokeless powder magazine (used for the ship’s main armament). A 1944 BUSHIP report suggests that a hatch leading to the black powder magazine was left open, with perhaps inflammable materials stocked nearby. A US Navy historical site history.navy.mil goes as far as to suggest that black powder might have been stockpiled outside of the armored magazine. Due to the total destruction of Arizona, it seems unlikely that a definitive answer will ever be found. Credit for the hit was officially given to Japanese pilot Tadashi Kusumi. The cataclysmic explosion ripped through the forward part of the ship, touching off fierce fires that burned for two days.
The blast that destroyed Arizona and sank her at her berth alongside Ford Island consumed the lives of 1,177 of the 1,400 on board at the time—over half of the casualties suffered by the entire fleet on the “Date which will live in infamy.”

Once the fires were finally extinguished and the surviving crew were able to board to check the ship’s status they found a burnt-out hull. The senior officer in charge submitted a status report to Admiral Kimmel saying,”The USS ARIZONA is a total loss except the following is believed salvageable: fifty-calibre machine guns in maintop, searchlights on after searchlight platform, the low catapult on the quarterdeck and the guns of numbers 3 and 4 turrets” (Memorandum, Commanding Officer, USS ARIZONA to CINCPAC, Pearl Harbor, T.H., December 13, 1941.
It is commonly yet incorrectly believed that Arizona remains perpetually in commission but she was placed “in ordinary” at Pearl Harbor on December 29, 1941, and Arizona was struck from the Naval Vessel Register on December 1, 1942. After her main battery turrets and guns were salvaged to be used as coast defence guns the wreck was cut down so that very little of the superstructure lay above water. 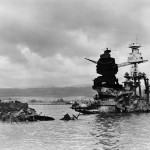 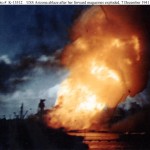 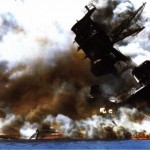