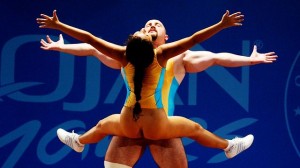 The video was created by The Viral Factory and commissioned by Trojan Condoms to create a buzz around their UK launch. The video and website spoof for a fictional event called the Trojan Games was created with fake sports of an adult nature. Each viral clip was embedded in the Trojan Games website, creating a huge effect by driving viewers to the site. In Nov 2006 the Viral marketing company, The Viral Factory, collated page impression figures from websites such as YouTube and Google Videos. They determined that this video as of Nov 2006 had been viewed 300 million times.

The video opens with what appears to be two athletes walking through a crowd. The voice-over tells us, in an Olympic Commentator style, that the two, Mosienko and Bubka, are from Ukraine and hope to win the event. As they walk up to the stage you notice that they don’t appear to be wearing pants. The girl, Bubka, “mounts” her partner Mosienko and then she lets go appearing to be held in place by Mosienko’s … “member”. They hold the pose for 3 sec to victory and the crowd goes wild waving Ukrainian flags as Mosienko and Bubka take gold for the sport of “Pelvic Power Lifting”.

The Viral Factory filmed in a real athletics arena in Romania and used genuine Romanian athletes, shooting for two days. They were promised by the local casting director that there would be no problem with the actors getting naked which turned out to be true except for one incident with the Weightlifter:

Only one of them was shy, poor bugger … He suddenly had a panic attack at the last moment … But really, all of them were perfectly happy, quite extraordinarily laid-back about it. Being English we were terribly sensitive and had people with towels ready as soon as we cut, we had little skin-coloured pouches made for long shots. One girl was parading around half nude for about 20 minutes after the shoot. We said go and put some clothes on and have some lunch, she said, ‘no, I’m hungry’!’ After that we all relaxed.–Film makers