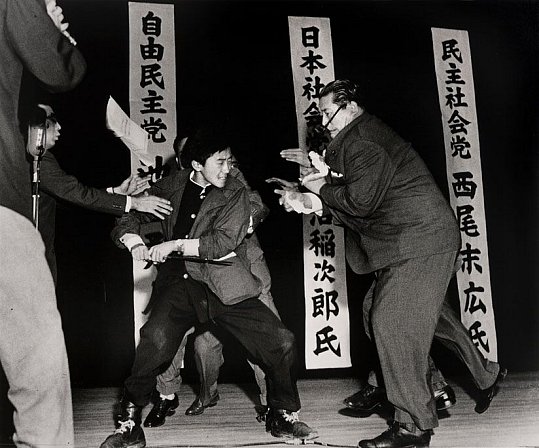 17-year-old Otoya Yamaguchi was a member of an ultra-right-wing nationalist group. His father, Shimpei Yamaguchi, was a colonel in the Japanese Self-Defense force. Even though Shimpei Yamaguchi was forced to resign his commission he defended his boy saying: “A rightist is better than a leftist.”. When Otoya was arrested police records record that he expressed regret that he was only able to kill Asanuma. He had planned to kill three people: Communist member Sanzo Nosaka, Japan Teachers’ Union Chairman Takeshi Kobayashi as well as Asanuma. The sword he used is called a wakizashi which is a small blade that the samurai used to wear. It was found by Otoya in the bottom of his father’s closet a week before the assassination.
On November 2nd, while in a juvenile detention center, Otoya used toothpaste to write a message on his wall: “Seven lives for my country. Ten thousand years for His Imperial Majesty, the Emperor!”. He then tore his bed sheet into strips which he used to make a rope to hang himself in a Japanese ritual called owabi. Owabi is a samurai tradition in which one commits suicide to apologize to those inconvenienced by Asanuma killing.
[midgoogle]