The Nation was still in shock from the assassination of President John F Kennedy when two days later on Sun, Nov 24, 1963, Oswald the prime suspect in the JFK murder was himself gunned down by Jack Ruby. The nation watched in horror as Ruby shot Oswald on live TV the first time a homicide was captured and publicly shown on live television.

JFK was assassinated on the afternoon of Nov 22, 1963. About an hour later Lee Harvey Oswald was arrested on suspicion of murdering both President Kennedy and Officer Tippit (Witnesses saw Oswald shoot Tippit as he stopped his squad car to question Oswald). By that evening he had been arraigned for both murders. Since the assassination of JFK hundred of reporters had been descending on Dallas and when word broke out about Oswald’s arrest the reporters headed towards police headquarters. District Attorney Henry M. Wade told the Warren Commission that he thought about 300 reporters and other individuals were hanging out on the third floor where Oswald was being questioned. When he was being questioned the hallways were so cramped and security so lax that anyone could have killed Oswald as he walked flanked by his police escorts through the hall of the third floor.

Due to media pressure for some kind of statement from Oswald an impromptu press conference was held around midnight in the basement assembly room of the Police Station. As many as 100 people reporters and curious onlookers crammed into the small room. The Police Chief Jesse Curry stopped the press conference almost as soon as it started because the media got out of hand, the newsmen “tried to overrun him.” Before the screams of reporters shouting questions drowned him out Oswald was able to give the following statement:

Well, I was questioned by Judge [Johnston]. However, I protested at that time that I was not allowed legal representation during that very short and sweet hearing. I really don’t know what the situation is about. Nobody has told me anything except that I am accused of, of, murdering a policeman.
I know nothing more than that and I do request someone to come forward to give me legal assistance.
Q. Did you kill the President?
A. No. I have not been charged with that. In fact nobody has said that to me yet. The first thing I heard about it was when the newspaper reporters in the hall asked me that question.
Q. Mr. Oswald, how did you hurt your eye?
A. A policeman hit me.46 — Warren Commission

During the Warren Commissions’ investigation when looking at the news camera footage of the midnight press conference Jack Ruby was identified as being present in the crowd of reporters.
Over the next two days, Oswald was interrogated several times at the Dallas Police Headquarters before it was decided to transfer him to the county jail. The decision to transfer Oswald was reached Sat evening, Nov 23 by Chief Curry. In an effort to get reporters to go home on Saturday night Curry had announced that around 10:00 AM the next day Ruby would be transferred. During the night, around 2-3am, the local FBI office received a call from an unidentified man who warned that a “committee” had decided “to kill the man that killed the President.” This threat was passed on to the Dallas police department and to Chief Curry.

With this threat in mind, Chief Curry decided to use an armored truck to transfer Oswald and his own men would handle the transfer. Some of the officers at the Dallas headquarters had suggested that Oswald either be moved at another exit or at an unannounced time but Captain J. W. “Will” Fritz one of Curry’s advisers negated the idea, as he said that Curry “wanted to go along with the press and not try to put anything over on them.” 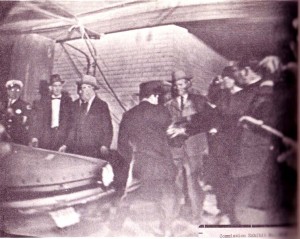 To provide security during the basement transfer extra police were called in and orders put out to secure the route the armored truck would take. The officer in charge of the patrol division for the city of Dallas, a Capt. C. E. Talbert, on his own initiative, took extra security precautions for the basement. First, he directed a Sgt. Patrick T. Dean, to clear the basement of all non-police personal and then directed a search of the basement looking in the rafters, above the A/C units and in the many closets. After the search, news media were allowed back into the basement after their credentials were checked although the Warren report found that police allowed in anything that looked official with some reporters testifying that they weren’t checked at all. When Oswald came down to the basement around 40 to 50 newsmen and 70 to 75 police officers were assembled.
At this time Oswald’s right hand was handcuffed to the left hand of Detective J. R. Leavelle. As they walked towards the waiting car Fritz walked ahead and then Oswald, with Detective Leavelle at his right, Detective L. C. Graves at his left. Leavelle would later testify lights from the camera’s made it impossible to make out anyone in the crowd. As the crowd of reporters surged forward, Oswald made it about 10ft before Jack Ruby slipped from the crowd and holding a .38 calibre revolver shot one bullet into Oswald’s abdomen.
It took a few minutes to get the unconscious Oswald out of the police station as the cars intended for his transfer were blocking the exits. The time lost in the confusion wouldn’t have made any difference as the single bullet did major damage and doctors were unable to save him. 48 hours and 7 min after the Presidents death Lee Harvey Oswald was pronounced dead. 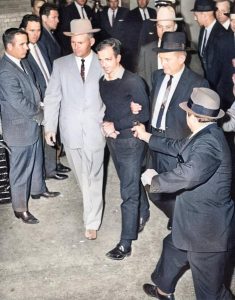 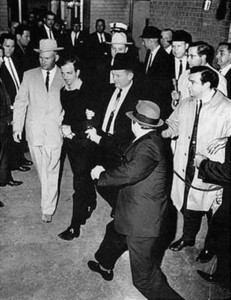 Just before the shooting

Through video footage of Jack Ruby standing outside of the police station and the Western Union money gram the Warren report was able to determine that he entered the basement no shorter than 2-3min before he killed Oswald. The Warren report also established that he received no help in entering and was able to slip by police guards as a police car was exiting the station. No press pass was found on Rudy when he was arrested and no discarded press passes were found in the basement. Ruby himself denied to the Commission that he received any form of assistance claiming that he just walked down the ramp into the basement when the police car was exiting.

Jack Ruby was born Jacob Rubenstein on March 25, 1911, in the heavily Jewish 24th Ward on Chicago’s West Side. He shortened his name to Ruby because of concerns that his Jewish name would hurt a planned mail order business. After serving in Army Air Force during World War II in 1946 Ruby returned to Chicago. In 1947 he moved to Dallas where he managed a number of bars, strip clubs, dance halls and nightclubs. During his time as a manager, he associated and was friends with many people in both law enforcement and the mafia.
During his trial, Ruby’s lawyer tried to get him off the hook by claiming mental illness. This defense failed and on March 14, 1964, Ruby was convicted of “murder with malice” and received the death penalty. This was later overturned and a second trial was about to begin when Ruby became ill and on December 9, 1966, Ruby was admitted to Parkland Hospital in Dallas.
Jack’s connection to the mafia has fueled many Conspiracy theories but several official investigations have ever revealed any concrete connections. Although while in jail he was visited by friends Sam and Joe Campisi, two high-level figures in the Dallas mafia.
Ruby himself started to ramble about conspiracies but as his health deteriorated in jail so did his mind. By 1967 Ruby was suffering from lung cancer but before that could kill him on January 3, 1967, he died from a pulmonary embolism. In a twist of fate, JFK, Oswald, and Ruby died in Dallas’s Parkland Hospital. 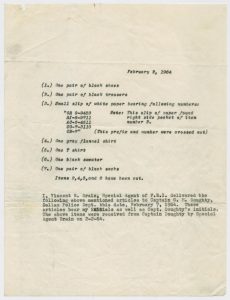 Only one network was covering the prison transfer live and that was NBC through their Dallas-Ft. Worth affiliate station WBAP-TV. CBS had a camera set up and was recording the events but instead of going live with the footage decided to stay with its Washington DC report of the preparations for JFK’s funeral. On the live NBC feed correspondent, Tom Petit described the transfer of Oswald in the basement. On camera you can see Ruby come into the picture squeeze off a shot and then hear Tom Petit screaming, “He’s been shot! He’s been shot! Lee Oswald has been shot! … There is absolute panic. Pandemonium has broken out.”
CBS’s coverage came via its affiliate KRLD-TV and cameraman George Phenix who just a few feet away from Oswald taped the whole encounter. Later on national TV the footage would be replayed again and again frame by frame and narrated by then up and coming CBS reporter, Dan Rather:

Now we will show you the film of Oswald being shot, still-framed, … Watch the hat in the right-hand corner of the frame. Watch Oswald’s eyes as they seem to catch the eye of the assassin [Ruby]. His head turns, he looks at the assassin and his eyes never leave him. The assassin moves in … and a few inches from {Oswald’s} abdomen, fires a shot. — Dan Rather