Behind the camera: The many press photographers and bystanders that took pictures of the movie shoot for, The Seven Year Itch
Where: The pictures were shot at Manhattan’s Lexington Avenue at 52nd Street close to the Trans-Lux theatre.
Photo Summary: Marilyn Monroe
Picture Taken: Late Sept 8, early morning of Sept 9, 1954

Before her death, Marilyn Monroe was an iconic Movie star who’s movies thrilled millions. This famous scene was shot for the movie, The Seven Year Itch

. The picture has been turned into posters, t-shirts, mugs and is probably her most famous image. Filmed on location on Lexington Ave, New York, the New Yorkers who turned up to watch the filming got so out of control that the director couldn’t use any of the footage taken because of the crowd noise. The scene had to be recreated in Studio but then was cut by the censors for being too steamy. In the actual movie, her skirt never rises above her knees.

Marilyn Monroe (June 1, 1926 – August 4, 1962) was an American actress, singer, and model. After acting in small roles for several years, she gradually became known for her comedic skills, sex appeal, and screen presence, going on to become one of the most popular movie stars of the 1950s. She was and is idolized throughout the world as a sex goddess. Later in her career, she worked towards serious roles with a measure of success but was always restrained by several prescription drug addictions. On August 4, 1962, Marilyn Monroe died between 8:30 p.m. and 10:30 p.m. at her home at 12305 Fifth Helena Drive in Brentwood, Los Angeles, California. She was 36 years old. The cause of death based on the toxicology report was acute barbiturate poisoning.

We haven’t lost a star; we’ve gained a center fielder
-Fox execs on the Dimaggio marriage

Marilyn was married three times in her short life. Her third and last was to Arthur Miller the famous playwright on June 29, 1956. Author of the play Death of a Salesman and a movie Marilyn stared in, The Misfits; their marriage lasted four years and seven months with the two divorcing in 1961. Her first marriage was when she was just 16 to James Dougherty on June 19, 1942. She filed for divorce in Las Vegas, Nevada and it was finalized on September 13, 1946.

Her second was in 1951 she eloped with, famous baseball player, Joe DiMaggio on January 14, 1954. Fox loved the idea of marriage with executives boasting that “we haven’t lost a star; we’ve gained a center fielder”. The marriage was rocky from the start with Joe pressuring Marilyn to become a quiet wife while Marilyn tried to keep her star rising. Even on their honeymoon, Marilyn left to do a tour for the troops in Korea. A busy schedule of movies saw Marilyn go directly from the movie set of Show Business to the set of The Seven Year Itch. This was a move that made Dimaggio furious as he wanted to spend some time with his new wife. An abusive man, friends, and makeup people would often see bruises on her arms and backs from her fights with Joe. When Marilyn visited Marlon Brando on the set of Desirée he noticed that her arm was black and blue. Yet the stoic Marilyn, while their marriage was crumbling she, had to shoot, The Seven Year Itch.

The scene from The Seven Year Itch

was a play turned into a movie about a man who sent his family away upstate to escape the hot and humid New York summer. While alone he meets his new neighbor, the blonde and beautiful Marilyn Monroe, known in the movie as “the girl”. The two get to know each other and he is torn between his lust for the girl and being faithful to his wife.

The scene in which the skirt was to blow up was a part of the movie were Marilyn’s character, known as the girl, was on a date with the main character, Richard Sherman played by Tom Ewell. They are walking out of the Trans-Lux theatre where they just watched Creature from the Black Lagoon. As they walk down the street Marilyn sees the breeze wafting up from the sidewalk grates as a subway car passes underneath. Even though it is night, New York is still hot and humid and she runs over to catch the breeze. As subways run back and forth and her skirt is lifted up, she says her lines from which we get some famous quotes such as, “Don’t you feel the breeze from the subway? Isn’t it delicious?” and “Ooohhh! This feels just elegant!”

This particular scene is where Richard Sherman is overtaken by the moment and kisses Marilyn. However, while the play had Sherman eventually sleeping with Marilyn’s character the movie ends with Sherman being faithful and running to upstate New York to join his wife and son. 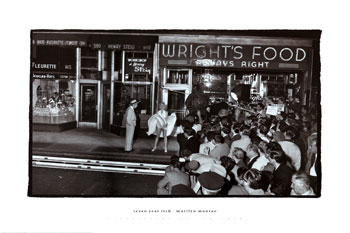 Crowd around Marilyn while filming the famous scene, picture by Sam Shaw

Directed by Billy Wilder the film required the subway skirt scene to be shot at a location on Lexington Avenue at 52nd Street in New York. Fox Studio publicity men put the word out on the street that Marilyn would be on location wearing an outfit that would, “stop traffic”. Marilyn who by this time was taking multiple pills for various ailments both real and imagined struggled with her lines. While Marilyn did a take after take a crowd began to develop around the many photographers who showed up to get pictures. Rather than being quiet and constrained, the mob of New Yorkers yelled and whooped whenever the skirt was blown up over her waist which the bright movie lights, despite wearing two sets of underwear, revealed “all” of Marilyn.

Joe Dimaggio hated publicity and Hollywood, he usually stayed away from the set but since Marilyn was filming in New York he hovered nearby drinking at a bar. He ran into a friend, Walter Winchell who convinced him to go to the set and watch Marilyn.

The scene when he arrived was of thousands of fans screaming every time they could see her underwear. Conservative Joe Dimaggio while listening to the roar of the mob in time with the skirt lifting over her waist became infuriated and stormed off the set. At the hotel, that night crewmen heard screaming from their room and the next day Marilyn’s hairdresser, Gladys Whitten had to cover up bruises on her shoulders with make-up.

After filming, the couple flew back to California were friends saw more fights and neighbors saw Marilyn wandering the streets crying. 274 days after getting married the two staged an elaborate press conference where they announced that they were getting a divorce due to, “conflict of careers” and, “the usual mental cruelty”.
The skirt scene that helped kill the marriage was thrown out by the director as the crowd noise made it unusable. The whole street was recreated in a studio so that Marilyn could do it again in privacy. Even then most of the skirt shots were cut from the picture when the Hollywood censorship board, the Hays Code or Production code, killed any shot where the skirt went over the knee.

Over the years actress, Debbie Reynolds amassed a huge collection of Hollywood memorabilia including the infamous dress used in this image. In 2011 her collection was put on the auction block and a lucky and very rich bidder bought the dress for $4.6 million ( $5.52 million after taxes and fees were included ) This smashed the record for the most-payed-for dress which was held by Audrey Hepburn’s iconic black dress from the 1961 film Breakfast at Tiffany‘s, which sold for $923,187.

AP Images handles the listening for some of the September 8, 1954, Seven Year Itch photos.