Behind the camera: Zhang Zhenshi (1914 – 1992) was a famous effigy painter and outstanding fine art educator in China
Where: China
Photo Summary: A painting of Chairman Mao. The original painting stands 91cm high and 68cm wide
Picture Taken: Was created for the 1950 anniversary, the first anniversary, of the Communists take over of mainland China

Mao Zedong (December 26, 1893 – September 9, 1976) was a Chinese communist leader who led the Communist Party of China (CPC) to victory against the nationalist Kuomintang (KMT) in the Chinese Civil War. The 20-year long civil war technically ended when Mao’s forces captured all of mainland China on which the CPC established the People’s Republic of China on October 1, 1949, in Beijing. The CPC is technically still at war with nationalist forces who retreated to and still remain on the island of Taiwan, the Republic of China (ROC). Both Taiwan and mainland China declare that they are the real China.

Mao leadership remains a controversial subject. Many see his rule as a great revolutionary leader who led China from a poor backward nation to world superpower. Critics point to the infamous, Great Leap Forward which killed anywhere from 20 to 70 million Chinese or the Cultural Revolution which greatly disrupted the country, for almost a decade. Officials now don’t know where to stand on Mao’s rule and the official line is that his policies were 70% right and 30% wrong. The book the Evil 100 list Mao as the third most evil person in history behind Hitler and Stalin. 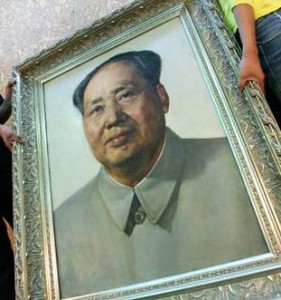 The original painting by Zhang Zhenshi

Over 30 painters were chosen to create portraits of Chairman Mao for the 1950 anniversary of the revolution. One of the painters, Mao’s favorite, was Zhang Zhenshi. Most of the 30 paintings have since been lost or destroyed but Zhang’s image of a solemn Mao dressed in a simple grey tunic was reproduced as a poster that was put up everywhere in China. The model for the giant image of Mao that hangs in Tiananmen Square is based on this image.

On June 3, 2006, the original painting was set to go on the auction block. The Beijing Huachen Auction Company which stated there would be no location restrictions on the portrait and that the sale would have been open to both Chinese and foreign bidders were forced to cancel the auction after a huge outcry from the Chinese public. Mao is still beloved by many Chinese and they feared that a foreign bidder would take it out of the country. Eventually, a deal was reached with the private Chinese-American owner who agreed to sell the painting to China’s National Museum. The purchase was jointly financed by the museum and the State Administration of Cultural Heritage. For the auction, the painting was valued at $120,000 American dollars but the price actually paid was not disclosed.