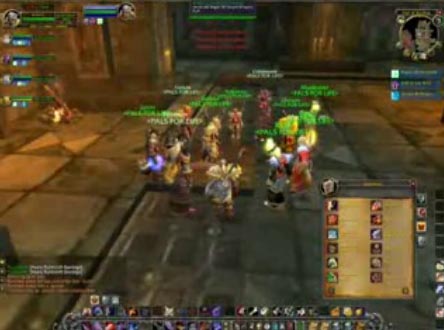 Behind the camera: Anfrony, Pals for Life member
Where: The Upper Black Rock Spire. Not too far in – the area is called the Rookery
Photo Summary: “Pals for Life” members and Ben Schulz aka Leeroy Jenkins
Picture Taken:

Not to be confused with Leroy Jenkins the famous Jazz musician, Leeroy Jenkins is the name of a famous machinima video clip, that was created in the Blizzard Entertainment’s popular MMORPG World of Warcraft or WoW. The clip is famous for one of the characters running off into a Lion’s Den … actually, Dragon’s Den where he gets himself and most of his companions killed. The clip has since become an Internet meme and spread well beyond the boundaries of the WoW community, into other online games and media. A presentation at the 2005 “Aesthetics of Play” conference at the University of Bergen described Leeroy as the “one icon of the WoW player, one movie from the game that most people have seen. So mainstream is the “Leeroy Jenkins” clip that the character was mentioned as part of a clue on the November 16, 2005 episode of the game show Jeopardy! as part of their college week tournament. ”

The video clip is a computer recording of the game World of Warcraft. The clip begins with a dozen players from the group or clan Pals for Life (P4L), including Leeroy, planning a raid on The Rookery, a virtual location in the WOW world, part of the Upper Blackrock Spire. The players are heard conversing over Ventrilo, a type of voice over software, before entering combat. Jamaal is the one doing most of the planning and talking. Leeroy, remains quiet and off to the side. He has since stated that he was away, “reheating myself some previously bought fried chicken for my own enjoyment”. Just as they are discussing tactics (which players of the game will recognize to be comically poor) and calculating the possible rate of survival for the attack, Leeroy suddenly springs to life, shouting his battle cry: “Alright chums, I’m (back), let’s do this! LEEROOOOOOOY!!! JENKIIIIIINS!!!”. He then charges fearlessly into The Rookery, to the complete and utter incredulity of his teammates. Attempting to save him, they follow him in and are quickly overwhelmed by the whelplings, and unable to stick to the plan. At the conclusion of the clip, one of his teammates remarks, “Leeroy, you are just stupid as hell”, to which he replies, “Least I have chicken.”

Almost as soon as the clip was posted WOW gamers claimed it was staged due and after much debate and controversy Pals for Life, Leeroy’s guild, have admitted that this was a staged promotional video. They maintain, however, that it is essentially a faithful re-enaction of a true event.

Leeroy aka Ben Schulz (aged 24 as of Oct 25, 2005)did a number of interviews including one with Played to Death and GGL.com. In the interviews, it’s revealed that Leeroy is based out of Laffayete, Colorado and he’s been playing WoW since the early open beta version. At the time of the interview, Ben’s character Leeroy was at, level 60 with a PVP rank of sergeant that works as a miner/engineer.
Leeroy did get kicked out of the P4L after the incident but was allowed to return 5min later. Ben, when asked about how often he plays the game, said ” …about four or five hours a day. Some days I take a break … I’m currently unemployed so that helps (laughs) … Actually I just graduated in December … I graduated with a degree in electrical engineering [with] emphasis on digital signal processing and system design stuff. So, like making a cell phone.” As of May 2006, Ben is working as a repair technician for industrial lighting. He was offered a position as a game tester for EA but at $10 an hour turned it down.
He got the name one day while hanging with his friends:

It was pretty much made up. I was sitting around with a few guild-mates drinking forties … we start throwing out name for each other and Leeroy Jenkins popped out. I like the name because it was fun to yell … The rushing itself doesn’t happen too often. It happens a little more now when we are joking around. My “Leeroy Jenkins” yell happens far more often. I’ve been yelling that for about four years. (laughs)
[Leeroy tried to gain control of his name and the rampant merchandising but he said there was,] “actually nothing I can do about it now. I can trademark the name henceforth, which I have looked into, but other than that the video is public domain. The [Pals 4 Life] have made our own T Shirts … That’s www.ThePals4life.com. We’ve only sold three shirts and a thong, but we are really excited about the thong selling. There is nothing in my life that makes me happier than pulling down a chick’s pants and seeing my face.

Cheering for the Whiter One

Leeroy stepped into a little bit of controversy when it was revealed that he would be cheering the “white” as in a caucasian team. Here is how he tried to explain it:

I guess it came out wrong but like I’ve tried explaining that before but until America televises video gaming to that extent and we have people that are that hyped about it and play that hard to get there we are not going to produce that kind of players that Korea is producing right now. They are superstars. They play against the best and people strive to do that much harder than they do here. So in that, generally, Koreans kick the shit out of the white dudes. And that’s what that was about. I was just doing that to root for the underdog.

This Internet phenomenon started with the release of a video clip online to the World of Warcraft forums. The video was released by the World of Warcraft Alliance player guild PALS FOR LIFE on the Laughing Skull PvP realm.
Leeroy was given a substantial boost in notoriety by the publication of an article in the August 2005 issue of PC Gamer UK by author Craig Pearson, entitled “The Ballad of Leeroy Jenkins”. Pearson’s article claims that the original video was designed as a negative commentary on the kind of “nerd-guilds” that meticulously and statistically plan out raids the way Leeroy’s guild was apparently doing. Leeroy is, in fact, the hero of the piece, acting against the geekiness of his guild.
A sidebar found in Pearson’s article titled “How to Be a Leeroy: Perhaps You Already Are?” cites Urban Dictionary as an indication that Leeroy has become a descriptive noun; “to Leeroy” is even being used as a verb in some circles. The article further encourages the readers to send in their best examples of being a Leeroy to “I’m a Leeroy” at the magazine’s address.


Mentions outside the Internet fuel the fame

Leeroy’s fame has crossed over into the mainstream by not only being featured as a Jeopardy question but also:

As of December 2005, the Warcraft Movies website reports well over 1,500,000 downloads of the original Leeroy Jenkins video. However, it is difficult to estimate the total number of people who have seen the original video largely because it has appeared on numerous other websites like google video and YouTube, file sharing networks, and has been sent extensively by email as well. On Google and YouTube alone there have been over a million downloads.

PALS 4 LIFE have now released as close to an ‘official’ transcript as is likely to be seen. Since there was no script the P4Ls have tried their hand at remembering who said what. Some of the audio is too bad to hear clearly, even for the P4Ls.
Jamaal: [talking to teammates outside cave] OK guys, these eggs have given us a lot of trouble in the past, uh does anybody need anything off this guy or can we bypass him?

Ritter: Uhh, I think Leeroy needs something from this guy.

Jamaal: Oh, does he, he [sic] need those Devout Shoulders? Doesn’t, doesn’t [sic] he a paladin?

Ritter: Yeah, but that will help him heal better, he’ll have more mana.

Jamaal: [sighs] Christ. OK, uhh well what we’ll do, I’ll run in first, uh gather up all the eggs, we can kinda just, ya know blast them all down with AOE. Um, I will use Intimidating Shout, to kinda scatter’em, so we don’t have to fight a whole bunch of them at once. Uhh, when my Shouts are done, uhh, I’ll need Anfrony to come in and drop his Shout too, uh so we can keep them scattered and not have to fight too many. Um, when his is done, Bas of course will need to run in and do the same thing. Uhh, we’re gonna need Divine Intervention on our mages, uhh so they can, uhh, AE, uh so we can of course get them down fast, cause we’re bringing all these guys, I mean, we’ll be in trouble if we don’t take them down quick. Uhh I think this is a pretty good plan, we should be able to pull it off this time. Uhh, what do you think Abduhl? Can you give me a number crunch real quick?

Leeroy: All right chums, I’m (back)! Let’s do this! LEEROOOOOOOY JEEENKIIIIIINSSS!!! [runs into cave]

Forekin: [incredulous] … Oh my God he just ran in. [runs in]

Jamaal: Stick to the plan!

Therien: It’s saying I can’t cast! I can’t move, am I lagging, guys?

Forekin: What the—what the hell?

Forekin: I don’t think you can cast with that shit on!

Abduhl: Leeroy you moron! [various put-downs of Leeroy amongst group]

Jamaal: This is ridiculous.

Abduhl: This is the (something)th time we’ve died on this, God!

Jamaal: Why do you do this shit Leeroy?

Leeroy [crying]: It’s not my fault!

Jamaal: We do have a Soulstone up, don’t we? [everyone dies] Think I need a Soulstone?

Abduhl: Yeah but I don’t think we brought a Warlock.

Abduhl: Leeroy, you are just stupid as hell.

Leeroy: … ‘Least I have chicken