Behind the camera: Many photographers took the same shot from different angles. The most reproduced pictures is the one shown here by Jeff Widener of the Associated Press. Other photographers who captured the scene are Charlie Cole, Stuart Franklin, and a number of TV crews
Where: The street name is Cháng Ān Dà Jiē (长安大街), or ‘Great Avenue of Chang’an’ just a minute away from Tiananmen, which leads into the Forbidden City, Beijing
Photo Summary: An unknown man blocks an advancing column of Chinese Type 59 tanks
Picture Taken: June 5, 1989

Popularly known as the Tank Man, or the Unknown Rebel, this anonymous man became famous when he pictures of him standing down a column of tanks with just his shopping bag. In April 1998, the United States magazine TIME included the “Unknown Rebel” in its 100 most influential people of the 20th century. It is easily one of the most famous pictures in the world.

As shots can be heard in the background, the clip opens with a column of Chinese Type 59 tank rolling down Cháng Ān Dà Jiē (长安大街), or “Great Avenue of Chang’an” Blvd. A man, the Tank Man, wearing what appears to be a long-sleeved white dress shirt and dark pants is standing in the middle of the road. While holding his jacket in one hand and shopping bags in another, he blocks the path of the tanks. The lead tank tries to drive around him but the Tank Man blocks the tank’s path. Eventually, he jumps up on the tank and at first tries to talk with the driver and then tries to talk through the main hatch on top of the turret. He then jumps off the tank and is bundled away by people standing on the street. 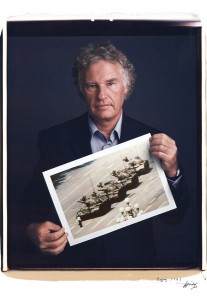 In 2012 Wired.com did a series of photos of photographers and their iconic pictures, this is Jeff Widener with his famous image

The protests were sparked by the death of former Secretary-General Hu Yaobang on April 15, 1989, a figure that many thought as unjustly persecuted by the Chinese government. The protests grew as different groups with a wide range of issues, some opposing views, came to Tiananmen Square. The protests were extensively covered by Western journalists who were allowed into Beijing to cover the Mikhail Gorbachev visit in May. The Chinese government was split on how to deal with the protesters but eventually, the hardliners seized control of the situation and on May 20, the government declared martial law and, on the night of June 3 and the early morning of June 4, army tanks and infantry from the 27th and 28th Armies of the People’s Liberation Army were sent to take control of the city. Local army units, the 38th Army, weren’t used as the military feared they were too sympathetic to the protesters. In fact, the commander of the 38th Army Xu Qinxian refused to carry out the martial law order and was relieved of his command.

In addition to the almost 300,000 military personnel (Twice as large as the American force that overthrew the Saddam regime in Iraq) that were deployed were also members of the Public Security Bureau (PSB). The PSB is China’s branch of government that handles policing, security and social order. By early morning on June 4, the protesters had been cleared from Tiananmen Square and over the next few days, the army and the PSB brutally suppressed the students and any media caught covering the crackdown.

One of the photographers, Charlie Cole, had spent the night running from police and the military. During the crackdown, he had witnessed an armored personal carrier (APC) that had run over some protesters. The outraged protesters then attacked the vehicle pulling out its drivers, killing them, and burnt the APC. While he was trying to get back to his hotel, he was attacked by PSB men, “One of the PSB ran up to me with an electric cattle prod and hit me in the side with it. Others punched and kicked at me. They ripped my photo vest off me and took all the film I had shot that evening.” He was eventually let go and more importantly they let him keep his cameras. While in his hotel he started shooting from the balcony of a photographer friend’s room, Stuart Franklin. Stuart had a room with a balcony on the 8th floor and while Charlie was shooting on the afternoon of June 5th he saw the Tank Man stand down the column of tanks. In a BBC interview he remembers:

It was an incredible thing to do, especially in light of what had just happened with the APC machine-gunners. I couldn’t really believe it, I kept shooting in anticipation of what I felt was his certain doom.
To my amazement, the lead tank stopped, then tried to move around him but the young man cut it off again. Finally the PSB grabbed him and ran away with him. Stuart and I looked at each other in somewhat disbelief at what we had just seen and photographed.
Later, Stuart left to go to Beijing University and I stayed behind to see what else might happen. Shortly after he left, PSB agents crashed through our hotel room door. Four agents swept in and assaulted me while a few others grabbed my cameras. 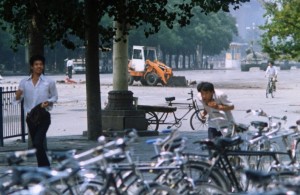 They ripped the film from my cameras and confiscated my passport. They then forced me to write a statement that I was photographing during martial law, which unbeknown to me carried a hefty prison sentence. They then put a guard at the door.
I had hidden the roll with the tank pictures in its plastic film can in the holding tank of the toilet. [Cole had hidden the rolls because he saw that PSB officials on the rooftops had noticed them taking pictures of the incident] When they left, I retrieved it and later made my way to AP to develop and transmit it to Newsweek in New York.
Numerous inquiries have been made by various agencies and magazines trying to uncover the young man’s identity and find out what happened to him. I’ve seen a number of accounts that name him as Wang Wei Lin, but that isn’t a certainty.
Personally I think the government most likely executed him. It would have been in the government’s interest to produce him to silence the outcry from most of the world. But, they never could. People were executed at that time for far less than what he did.
I think his action captured people’s hearts everywhere, and when the moment came his character defined the moment rather than the moment defining him. He made the image, I just took the picture. I felt honored to be there.

Charlie Cole would later die of sepsis on September 5, 2019, aged 64. He had been living in Bali, Indonesia.

In 2013 Stuart Franklin did an interview with VICE where he talked about taking his famous image:

It was all very uncertain [Stuart would get the photos out of China]. The police and security people were going from room to room in my hotel, searching for journalists and confiscating films. That atmosphere was very worrying. I remember packing my film into a box of tea that was supplied in the hotel room and asking someone who was going back to Paris to take it for me. I was left in China without my film. I wasn’t worried about it once the film was out, and I didn’t mind if I lost a couple of cameras. It wasn’t easy—we were shot at, at times—but I was lucky.

When I got back from China, I went into Michael Rand’s office at the Sunday Times Magazine. He was laying out one of my photos on the cover of the magazine, but it was another of the photos from my trip —a topless guy with his arms raised. That became equally well known for a while. The “Tank Man” picture grew in importance over time, but it didn’t actually stand out far from the body of work immediately after the event.

Who is the Tank Man?

Little is publicly known of the man’s identity and or his fate. It would have been in China’s best interest that he be brought forward as proof that he wasn’t executed but the Chinese have not been able to. This could mean any number of things including, that in the confusion following the crackdown he was either killed on the streets or arrested and executed, or perhaps the PSB never identified who he was. So basically you have two schools of thought. One that he was arrested and the other that he managed to slip away. 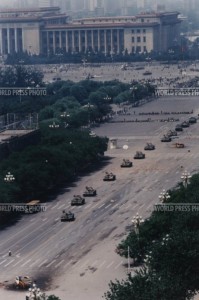 Tank Man wasn't just standing up to a few tanks, he was staring down dozens of tanks. Photo by Stuart Franklin

The arrested side believes that the people who hustled the Tankman away were PBS agents and even if they weren’t they don’t believe that the Tankman could have slipped past security.

The slipped away side, view the people that ran out to get him as being just ordinary people who then slipped away into the crowds.

China follows a policy of total silence when talking about the Tiananmen Square protest and the Tank Man’s fate. Officials have only spoken about it once, in a 1990 interview with Barbara Walters. Then-CCP General Secretary Jiang Zemin was asked what became of the man:

No one knows for certain how many people died during the Tiananmen Square massacre. The Chinese Red Cross at first reported 2,600 killed but then under intense government pressure retracted the total. The official government body count is 241 dead, including 23 officers and soldiers, and 7,000 wounded. After the crackdown, China moved on with its economic reforms and since the protest is taboo to discuss, most young Chinese don’t even know it happened.

Copyright to this photo is managed by Magnum Tiananmen Square – Man vs Tank by W. Eugene Smith