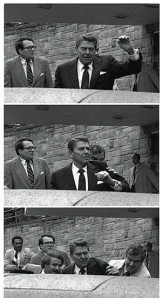 My speech at the Hilton Hotel was not riotously received – I think most of the audience were Democrats – but at least they gave me polite applause. After the speech, I left the hotel through a side entrance and passed a line of press photographers and TV cameras.
I was almost to the car when I heard what sounded like two or three firecrackers over to my left – just a small fluttering sound, pop, pop, pop. I turned and said, “What the hell’s that?” Just then, Jerry Parr, the head of our Secret Service unit, grabbed me by the waist and literally hurled me into the back of the limousine. I landed on my face atop the armrest across the back seat and Jerry jumped on top of me. When he landed, I felt a pain in my upper back that was unbelievable. It was the most excruciating pain I had ever felt. “Jerry,” I said, “get off, I think you’ve broken one of my ribs.”
“The White House,” Jerry told the driver, then scrambled off me and got on the jump seat and the car took off. I tried to sit up on the edge of the seat and was almost paralyzed by pain. As I was straightening up, I had to cough hard and saw that the palm of my hand was brimming with extremely red frothy blood. “You not only broke a rib, I think the rib punctured my lung,” I said.
Jerry looked at the bubbles in the frothy blood and told the driver to head for George Washington University Hospital instead of the White House. By then my handkerchief was sopped with blood and he handed me his. Suddenly, I realized I could barely breathe. No matter how hard I tried, I couldn’t get enough air. I was frightened and started to panic a little. I just was not able to inhale enough air. We pulled up in front of the hospital emergency entrance and I was first out of the limo and into the emergency room. A nurse was coming to meet me and I told her I was having trouble breathing. Then all of a sudden my knees turned rubbery. The next thing I knew I was lying face up on a gurney and my brand-new pinstriped suit was being cut off me, never to be worn again.
The pain near my ribs was still excruciating, but what worried me most was that I still could not get enough air, even after the doctors placed a breathing tube in my throat. Every time I tried to inhale, I seemed to get less air. I remember looking up from the gurney, trying to focus my eyes on the square ceiling tiles, and praying. Then I guess I passed out for a few minutes. I was lying on the gurney only half-conscious when I realized that someone was holding my hand. It was a soft, feminine hand. I felt it come up and touch mine and then hold on tight to it. It gave me a wonderful feeling. Even now I find it difficult to explain how reassuring, how wonderful, it felt. It must have been the hand of a nurse kneeling very close to the gurney, but I couldn’t see her. I started asking, “Who’s holding my hand? Who’s holding my hand?” When I didn’t hear any response, I said, “Does Nancy know about us?” — Reagan