Behind the camera: Bob Landry
Where: Bed made up with satin sheets
Photo Summary: Rita Hayworth promoting the movie ‘You’ll Never Get Rich’
Picture Taken: Summer of 1941, August 11th edition of LIFE

In 1941 the American people, for the most part, wanted to stay out of the war raging in Europe. While the Axis and Allies fought it out in North Africa, in the USA life continued as usual. Factories produced, farmers farmed and Hollywood pumped out movies. LIFE magazine in cooperation with the movie studios would often do photo shoots of upcoming stars to promote their movies. In 1941 Rita Hayworth was making You’ll Never Get Rich

and so in its August 11, 1941 edition, LIFE did a photo spread for the movie. A few months later the Japanese bombed Pearl Harbor dragging America into WWII. As young Americans left for combat they grabbed Hayworth’s picture to keep them company

, by the end of the war over 5 million copies were printed making it one of the most famous pictures of the war, second only to Betty Grable’s Pinup. In December of 2002 the dress she wore in the picture sold at Sothebys for $26,887 USD.

In the 1940s LIFE magazine was a huge platform for Hollywood to advertise its upcoming releases. Movies it spotlighted would drive the crowds into the theaters. Columbia Pictures was able to successfully lobby to have its upcoming movie, You’ll Never Get Rich

John G. Morris in his book “Get the Picture: A Personal History of Photojournalism” remembers:

One day, a Columbia Pictures press agent named Magda Maskel suggested photographing Rita Hayworth in a black lace nightgown that Maskel’s mother had made. [Life’s Hollywood correspondent, Richard] Pollard and photographer Bob Landry met Maskel at Hayworth’s apartment. She knelt on a bed in the nightie, looking provocative, and Landry snapped away. Good, but something else might be done. Pollard spoke up: “Rita, take a deep breath.” That was it. The perfect frame. — John G. Morris Photo editor

After doing Hayworth’s photo spread Landry was still a new photographer in the business and so he was sent to report on American naval exercises in the Pacific in December of 1941. While the Japanese bombed Pearl Harbor Bob Landry was only 100 miles (160 km) out from the naval base. He was one of the first reporters to witness the carnage of the attack, but a lot of the photos he took were delayed for months due to censorship concerns. During the war, Landry would shoot five LIFE covers during his first year with the magazine.

Hayworth was actually signed with Fox Studios for several months under the name of Rita Cansino before after six months Fox dropped her. She did a number of independent films before catching the eye of Columbia Pictures who signed her in the 1930s. Her break out role was a minor part in Only Angels Have Wings

. As her popularity peaked in the late 40s on May 27, 1949 she married the British based Prince Ali Salman Aga Khan a son of Aga Khan III, then the head of the Ismaili Muslims. Their wedding, her third including one to Orson Welles, was a huge affair that captured the world’s attention. It soon dissolved in 1953 and she returned to film work, her career went well into the 70s when she started showing signs of dementia, doing her last movie, The Wrath of God

After having trouble remembering simple things about her life she was told by doctors that she had Alzheimer’s disease. Her celebrity brought a lot of attention and research funding for, what was then little-understood disease. When she died on May 14, 1987, President Reagan (not yet diagnosed himself) praised her contribution and brave face towards the disease. In a moment of lucid thought, she once told an interviewer, “whatever you write about me, don’t make it sad.”

After developing the image the young Armenian immigrant knew he had a winner but didn’t know how to go about publicizing it. Eventually, he was able to get in contact with Life magazine who used it in their magazine and then on the May 21, 1945, cover. For the image that would make what Karsh called, “the turning point in my career” Life paid him the grand total of $100.
[midgoogle] 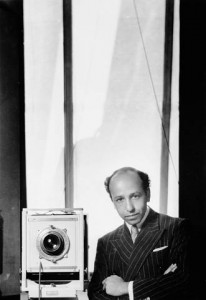 Yousuf Karsh was an ethnic Armenian born in Mardin Turkey on December 23, 1908. He grew up under intense Armenian-persecution where he wrote, “I saw relatives massacred; my sister died of starvation as we were driven from village to village.”
To escape persecution when he was 16, his family sent him to a photographer uncle named George Nakash who lived in Canada. When he first arrived in Eastern Quebec, young Yousuf wanted to be a doctor and worked in his uncle’s studio to raise money for medical school.
Showing promise as a photographer, Nakash sent him to study under a family friend, John Garo, a renowned photographer who lived in Boston, USA. For three years Yousuf learned the tricks of the trade often accompanying Garo to high society functions across the Eastern seaboard. During this time he became engrossed in photography and any thoughts of being a doctor were forgotten.
He returned to Ottawa and set up a studio because, “I chose Canada because it gave me my first opportunity and I chose Ottawa because, as the capital, it was a crossroads that offered access to a wide range of subjects,” As word of his talents spread he set up studios in other cities like New York and London for the convenience of his clients but it was in Canada that he captured his famous Churchill portrait.
The Churchill shot cemented his fame and throughout his career, he went on to shoot other many famous portraits and many famous people. On July 13, 2002, Karsh died at Boston’s Brigham and Women’s Hospital after complications following surgery. He was 93 years old.