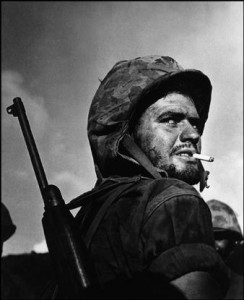 His war injuries plus the injuries suffered from his beating at the hands of Japanese industrialists caused him to collapse into a bitter world of pain med-addiction and self-destruction. After ending his second marriage he struggled in poverty for a few years before, on October 15, 1978, he suffered a massive stroke in a Tucson, Arizona, while he was shopping to buy cat food. He was 59 years old.