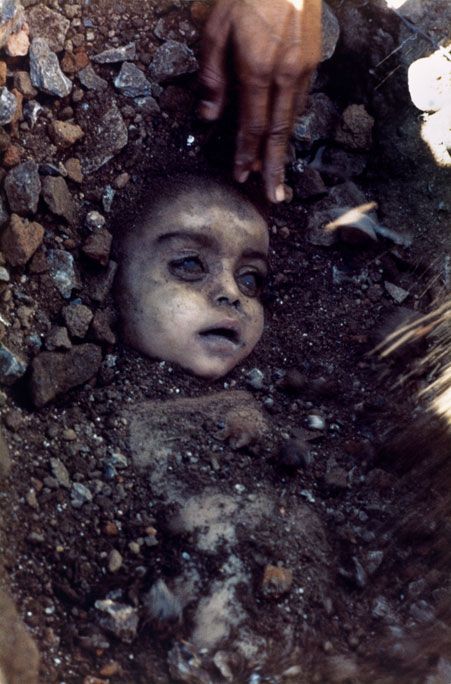 On the night of December 2-3, 1984 an explosion at the Union Carbide (UCIL) released an immense toxic cloud that spread into the surrounding metropolis of Bhopal, Madhya Pradesh, India. Over 2000 people were killed immediately, children and the sick were especially vulnerable; it remains the world’s worst industrial disaster. The next day people struggled to bury their dead family members. Two photographers Pablo Bartholomew and Raghu Rai were present and took this photo as someone was burying their loved one. Bartholomew’s image went on to win the 1984 World Press Photo of the Year. 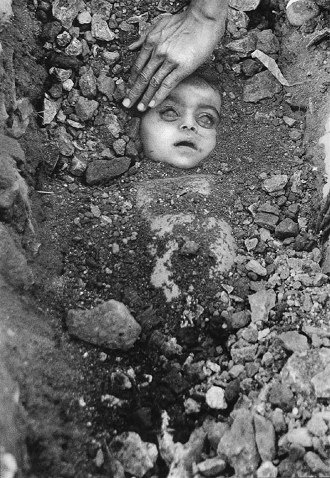 Photographers Pablo Bartholomew and Raghu Rai rushed to the city to document the disaster. Rai remembers that “There was a high possibility of journalists and photographers being physically affected by the chemical contamination. But then, there is always an element of risk in any assignment.” The came across a burying party and standing at different angles took a picture of an anonymous man burying a child. Wiping away the dirt to get one last look the two photographers captured the moment just before the grave was filled. In an interview, Raghu Rai said “So many bodies were being buried, and this child I photographed, I must have taken six, eight frames, and they were about to pour mud on it … I didn’t want [the moment] to be covered up and buried away because, for me, this expression was so moving and so powerful to tell the whole story of the tragedy.”

This touching event caused both photographers to break down in tears at the site. Had the two not come to cover the disaster the carnage of the toxic might never have been recorded. There is no video coverage or other photos of the event other than those taken by the two photographers. The two did not ask the identity of the man burying his daughter and no one has claimed to be her relative. Her identity remains unknown.

Around midnight of the night of December 2nd and 3rd, a large flow of water entered tank 610, containing 42 tonnes of methyl isocyanate, at the Union Carbide factory. The presence of water in the tank set off a series of chemical reactions that drastically increased the pressure in the tank. This pressure triggered the emergency venting procedure which released a large volume of toxic gases into the atmosphere. Aziza Sultan a Bhopal resident remembers the following:

At about 12.30 am I woke to the sound of Ruby coughing badly. The room was not dark, there was a street light nearby. In the half light I saw that the room was filled with a white cloud. I heard a great noise of people shouting. They were yelling ‘bhaago, bhaago’ (run, run). Mohsin started coughing too and then I started coughing with each breath seeming as if we were breathing in fire …
The toxic cloud mixed with elements in the poorly made factory plumbing spread to the surrounding city exposing over 500,000 people. Two to three thousand people were killed immediately. One week after the disaster another 6000 died and over time another 8000 would die due the effects of the poisonous gas. Satinath Sarangi of the Bhopal Information and Action group claims that, “Even now, there are at least 150,000 people with chronic illnesses of the lungs, of the brain, of the stomach, of reproductive system, people with a range of mental health disorders.”

Pablo Bartholomew went on to become a successful and independent freelance photojournalist. With the coming of the digital age of photography and merging of photo agencies, Bartholomew developed an online photo delivery system that allows photographers to remain independent of the big agencies.

Raghu Rai is still a successful photographer and still seeks justice for the Bhopal victims. In 2002 he did a Bhopal photo report for Greenpeace.