Einstein, the man who brought us E=mc2, nuclear power, and changed how we look at the universe. His name, Einstein, has become synonymous with brilliance or genius. Yet he wasn’t the serious, stodgy scientist stereotype, which is perhaps why he is still such a popular figure. His giant intellect, crazy hair, humor and an indifferent wardrobe made him probably one of the most famous scientists if not public figures in history. The picture of Einstein with his tongue sticking out seems to sum up these down to earth characteristics that people like so much about him. Frederic Golden of TIME nailed it when he said, Einstein was “a Cartoonist’s dream come true.”

The shot was taken on Einstein’s 72nd birthday right after an event in his honor was finished at Princeton on March 14, 1951. While walking with Dr. Frank Aydelotte, the former head of the Institute for Advanced Study, and Mrs. Aydelotte back to their car, reporters followed trying to get shots of Einstein. Art Sasse of the INP let the crowd of reporters take their pictures and when the crowd had dispersed walked up close to the car and said, “Ya, Professor, shmile [sic] for your birthday picture, Ya?” Einstein probably thinking the photographer wouldn’t be fast enough stuck his tongue out and quickly turned his head away. The picture ran as a shot of all three people in the car. The editors debated on whether or not to use the picture and Sasse remembers that “Caveo Sileo, assignment editor … Liked it, but the chief editor didn’t. So they had a conference with the ‘big chiefs upstairs.’ The picture got okayed, and we used it…” Einstein liked the image and cut up the picture so that it was just his head. He used it for greeting cards that he sent to his friends. This famous image has probably been reproduced on everything from posters to coffee cups. 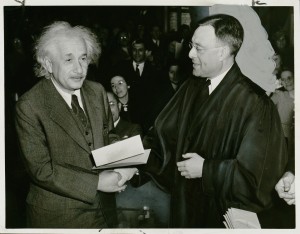 
Ever seen a picture of young Einstein? 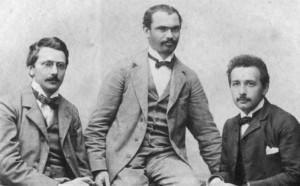