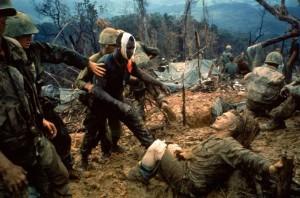 Behind the camera: Larry Burrows
Where: Close to Hill 484, near the DMZ in South Vietnam
Photo Summary: Wounded Marine Gunnery Sgt. Jeremiah Purdie reaching out to a fellow Marine near Hill 484. On the far left is 19-year-old, Navy corpsman Ron Cook and the man whose hand is touching Purdie’s shoulder is 18-year-old Private Dan King.
Picture Taken: October 5, 1966

After a long battle the wounded American Marines of, 3rd Battalion, 4th Marine Regiment, lay in wait for medical evacuation on a muddy hill in Quang Tri Province, just below the Demilitarized Zone (DMZ). It was there that the Englishman Larry Burrows captured this image of wounded Marine Gunnery Sgt. Jeremiah Purdie reaching out to a wounded comrade 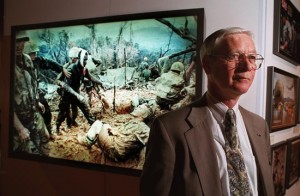 On the far left of the picture is, then 19-year-old, Navy corpsman Ron Cook (Gary Landers photo)

In September of 1966, American Marines were ordered to two granite peaks, Hill 400 and Hill 484, in the forested region of Quang Tri Province, just below the Demilitarized Zone (DMZ). The North Vietnamese forces were crossing the border and the Marines were sent to engage them.

Ron Cook a corpsman assigned to Kilo Company, 3rd Battalion, 4th Marine Regiment remembers how much his unit struggled not just against the enemy but the infamous non-combat horrors of Vietnam. Disease-carrying mosquitoes, huge leeches, poisonous snakes were always a danger and all the while the rain meant that everything was wet all the time. At just 19 he struggled with caring for so many wounded.

I think any corpsman that served in Vietnam will say we were kids taking care of kids. We were put under the most stressful situations. I mean, when you’re an 18-year-old kid and they hand you 56 Marines and say, “Here, keep them alive if you can; the ones you can’t, we’ll just tag and bag and send them home to their mothers,’ it’s a lot of responsibility for a kid.

After days of fighting Hill 400 was secured and the engineers carved out a landing pad between Hill 400 and 484, an area that was called Mutter’s Ridge. While other units pushed on, Ron Cook’s Kilo company stayed to evacuate the wounded and regroup. It was here that the quiet English journalist, Larry Burrows, was able to take some pictures of the men.

LIFE editors didn’t initially publish this image, instead printing other pictures Burrows had taken. It wasn’t until February 1971, that LIFE published the image in an article commemorating the photographer who had recently gone missing in Laos.

[bigquote quote=”He never got in the way. He never imposed, He blended into the background. He was very quiet. That’s why they called him ‘the compassionate photographer.'” author=”Ron Cook”]

Born in 1926 London Burrows dropped out of school to take a job at LIFE when he was just 16. He worked in the British photo labs during WWII and it is often rumored that it was he who was responsible for destroying Robert Capa’s D-Day negatives. After the war he became a photojournalist and arrived in Vietnam in 1962. He hoped to cover the Vietnam War until there was peace.

On February 10, 1971, four journalists (Kent Potter 23, Keisaburo Shimamoto 34, Henri Huet 43, Larry Burrows 44) were flying in a helicopter over Laos when they were shot down. After an extensive search, they were thought lost to the jungle. LIFE’s Managing Editor, Ralph Graves, wrote about the missing pilots who he thought had surely died in the crash:

I do not think it is demeaning to any other photographer in the world for me to say that Larry Burrows was the single bravest and most dedicated war photographer I know of. He spent nine years covering the Vietnam War under conditions of incredible danger, not just at odd times but over and over again. We kept thinking up other, safer stories for him to do, but he would do them and go back to the war. As he said, the war was his story, and he would see it through. His dream was to stay until he could photograph a Vietnam at peace.

It took until April of 2008 before the helicopter wreckage and the bodies were found.

Born March 22, 1931, in Newport News Jeremiah Purdie was the baby of seven children and lost his mother, Annie Purdie, due to childbirth complications when he was only 3 weeks old. At just 17-years-old he joined the Marines and even fought a few weeks in the tail end of the Korean War. He served in Vietnam until he was forced out.

He left the Marines in ’68 and found his way as a district manager for a shoe chain in Sacramento, California. He moved to the New Jersey for work and met his wife, Angel, in December 1969. He wrote a book ( The Journey That Brought Me to Glory: The Black Boy, the Marine, and the Christian

) and found God, after a cancer scare, becoming an ordained deacon.

He died from heart failure at the age of 74 on May 06, 2005. In early May of 2014 former U.S. Postal Service member and 66 years-old Dan King was able to visit Purdie’s grave to his goodbyes, something he always dreamed of doing. Purdie’s family and members of his local Lumbee Warriors Association were able to join him.

This picture is owned by Getty by Larry Burrows

5 thoughts on “Reaching Out”