Behind the camera: AP Photographer
Where: White House lawn Washington D.C. America
Photo Summary: Nixon giving his famous V sign before he boards the Presidential helicopter, Army One (Until 1976 Marine Corps shared the responsibility of helicopter transport with the Army).
Picture Taken: August 9, 1974

Well, when the President does it, that means that it’s not illegal
-Nixon

Say Nixon to anyone and ask what word comes to mind, most likely they will say “Watergate”. One of the biggest scandals in America’s history, Watergate forced the 37th President of the United States, President Richard Milhous Nixon, to resign from the president’s office on August 9, 1974 (The only president ever to resign). Every other scandal since then has had the suffix “gate” added to it. The image of Nixon entering the Marine-One Helicopter door, smiling and giving his patented two-handed V-sign was for many
the last image of Nixon. 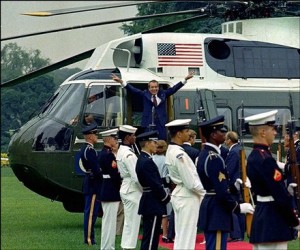 Nixon was born Jan 9, 1913, to Francis Nixon and Hannah Milhouse Nixon in Yorba Linda, California. Raised a Quaker he lived a modest life yet still managed to excel in school earning a full-tuition scholarship from Harvard. The Harvard scholarship didn’t include living expenses, so Nixon couldn’t go and instead studied at the local Quaker school, Whittier College. He graduated in 1934 second in his class and managed to secure a full scholarship at Duke University School of Law.
He returned to California after graduation where he practiced law and met his future wife Pat, a high school teacher. The two married on June 21, 1940. When war broke out the next year he served as an officer in the Navy eventually working in the supply corps of the South Pacific. As a poker shark he built up a large fund which when the war ended, he used to fund his election campaign to get into Congress.
Nixon quickly rose through the political ranks becoming Vice President on Dwight D. Eisenhower’s 1952 ticket. In 1960, he first tried to become President running against and losing to John F Kennedy. In 1962 he again lost an election this time for California Governor. He moved to New York where he worked as a high profile lawyer until 1968 when he made a political come back to not only win the Republican nomination for President but also the election itself. Beating Hubert H. Humphrey and George Wallace, Nixon became the 37th President of the United States.

He took America off the gold standard, created many of the acronyms that we are familiar with today including the: Environmental Protection Agency (EPA), the Drug Enforcement Administration (DEA), even the Strategic Arms Limitation Talks Treaty with Russia (SALT Treaty). The Nixon presidency normalized diplomatic relations with Communist China, talked to Neil Armstrong and Buzz Aldrin while they walked on the moon, and among other things created the Legal Services Corporation. However, the Nixon White House will always be marred by some of the Bloodiest years of the Vietnam War, secret bombings of neutral Cambodia and of course Watergate.
[midgoogle] 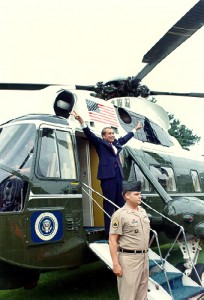 On June 17, 1972, Frank Wills, a security guard working at the Watergate Hotel in Washington, D.C. called the police when he noticed suspicious activity. The police arrived and arrested five men who were discovered breaking into the headquarters of the Democratic National Committee. The five men, Bernard Barker, Virgilio González, Eugenio Martínez, James W. McCord, Jr., and Frank Sturgis were discovered to have links to the CIA and the Committee to Re-elect the President (CRP also known as CREEP). The men had been part of a plot to sabotage the Democratic election bid the burglary was later revealed as an attempt to repair listening devices planted in an earlier break-in. The White House at the time was able to deny any links to the men but over the course of two years two reporters, Bob Woodward and Carl Bernstein, were able to uncover a series of embarrassing and incriminating disclosures about Nixon’s abuse of presidential executive powers. The final straw that forced Nixon from office was a tape between the Vice President and Nixon, the recording would later be known as the “smoking gun”.

Secretive and often paranoid Nixon had taken to tape recording all activities in the White House. These tapes would later be used against Nixon when a transcript of a recording made in the Oval Office, the so-called “smoking gun” tape was released on August 5, 1974. It showed that on June 17, 1972, six days after the Watergate break-in, Nixon had discussed using the CIA to block the FBI’s investigation of the burglary. This recorded conversation directly linked “Tricky Dick” to the burglary something he always denied. Seeing the writing on the wall and seeking to avoid a long drawn out impeachment trial, three days later Nixon gave a televised resignation speech and on August 9, 1974, boarded the Army One Helicopter. Just before entering he turned back to the White House and Press and gave his famous smile and V-sign.


Hunter S. Thompson on the scene

In with the Press Club was reporter Hunter S. Thompson

I walked outside to the Rose Garden, where a big olive-drab helicopter was perched on the lawn, about 100 feet out from the stairs. The rain had stopped and a long, red carpet was laid out on the wet grass from the White House door to the helicopter. I eased through the crowd of photographers and walked out, looking back at the White House, where Nixon was giving his final address to a shocked crowd of White House staffers. I examined the aircraft very closely, and I was just about to climb into it when I heard a loud rumbling behind me; I turned around just in time to see Richard and Pat coming toward me, trailing their daughters and followed Closely by Gerald Ford and Betty. Their faces were grim and they were walking very slowly; Nixon had a glazed smile on his face, not looking at anybody around him, and walked like a wooden Indian full of Thorazine.

…I lit a cigarette and watched him climb the steps to the door of the helicopter. . . Then he spun around very suddenly and threw his arms straight up in the famous twin-victory signal; his eyes were still glazed, but he seemed to be looking over the heads of the crowd at the White House. Nobody was talking. A swarm of photographers rushed the plane as Nixon raised his arms– but his body had spun around too fast for his feet, and as his arms went up I saw him losing his balance. The grimace on his face went slack, then he bounced off the door and stumbled into the cockpit. … The helicopter went straight up and hovered for a moment, then swooped down toward the Washington Monument and then angled up into the fog.
Richard Nixon was gone.

After leaving by helicopter Nixon fly flew from the South Grounds of the White House to Andrews Air Force Base, Maryland. He later recounted, “As the helicopter moved on to Andrews I found myself thinking not of the past but of the future. What could I do now?…” At Andrews, Nixon boarded the Air Force One Jet that flew him to El Toro Marine Corps Air Station, California and then to his new home, San Clemente, California. While flying to California to start his self-imposed exile back in the East Room of the White House, Chief Justice Burger swore in Ford as the 38th President of the United States. When news reached the pilot of Air Force One, he radioed in to change the plane’s call sign from “Air Force One” to “SAM 26000″ as the plane no longer carried the president.
In his home state of California Nixon over the years with carefully timed releases of interviews and books slowly worked his way back into the Washington political scene, even visiting the White House. By his death on April 22, 1994, he was seen as a respected elder statesman and gave counsel to both Republican and Democratic governments.