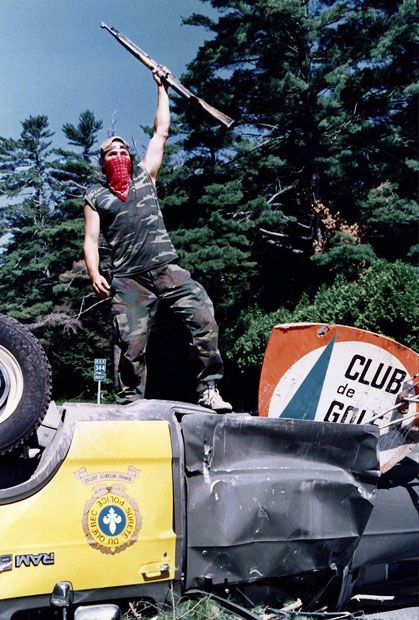 Behind the camera: Tom Hanson
Where: First Nation blockade near the Club de golf d’Oka
Photo Summary: Richard Nicholas standing on top of an overturned Sûreté du Québec police vehicle that had been turned into a barricade
Picture Taken: July 11, 1990

In 1990 the Oka golf course wanted to expand their course onto land that the local Mohawk community of Kanesatake viewed as their historical, sacred burial ground. The Mohawks in an effort to stop development set up roadblocks. The major ordered the blockades down and in the ensuing violent confrontation one police officer, 31-year-old SQ Corporal Marcel Lemay, was killed and the blockades still left standing. One of the First Nation activists, Richard Nicholas, climbed on top the newest addition to the Mohawk blockades, overturned police vehicles seized after the government forces had retreated. Below the blockade were two photographers, John Kenney of the Montreal Gazette and Tom Hanson. Hanson snapped this shot while Kenney shot a similar cropped version.

Over three hundred years ago the New France government granted land to Catholic Sulpician seminary in 1717. Part of the land, a Mohawk burial ground was reserved for the local Mohawk First Nation. The seminary held the land in trust for the Mohawks but would over the years take full ownership. A military confrontation in 1869 between Mohawks and missionaries over the land had to be put down by local militia. The land remained in dispute even when it was sold by the seminary to private concerns. In 1961, the city had obtained ownership of the land and built a private nine-hole golf course, the Club de golf d’Oka, on a portion of the land. When they wanted to expand the golf course the Mohawks erected barricades to stop construction. A court order ruled on the side of the city and ordered the blockade to be removed. The Mohawk’s refused and on July 11, 1990, a police fast action response team tried to drive off Mohawk activists using tear gas canisters and flash-bang grenades. In the confusion, someone opened fire and a 15-minute bullet exchange ensued forcing the police to fall back, abandoning six police cruisers and a bulldozer. During the firefight, 31-year-old SQ Corporal Marcel Lemay was shot in the face and died a short while later.

John Kinney one of two photographers close to the blockade, the other being Hanson, remembers what happened on that day:

We were the only two people there, It was the morning of the first day of the crisis. The Mohawks had set up their blockade with the SQ vehicles they’d taken over, and this guy hopped up there on top and looked down the hill and made his defiant gesture.
It was a quick thing. Neither of us spoke to him. Through the whole summer, I always wondered who he was, but I could never identify him … He wasn’t even focused on us; most of the media were way down at the bottom of the hill and that’s where he was looking, not at us at all. 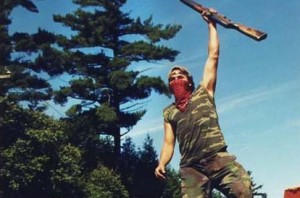 With the police overmatched the military was called in and for the next few months, the two forces were locked in a standoff. The media attention among the Mohawks created some First Nation celebrities including a Mohawk warrior known as, Lasagna.

The Oka Crisis lasted seventy-eight days before the warriors threw their guns in the fire, ceremonially burned tobacco and then walked out of the pines and tried to break out of the blockade. The federal government spent $5.3 million to purchase the section of the pines where the golf course expansion was to take place, to prevent any further development. Some of the lands were handed over to the Mohawks but the Kanesatake tribal government is still negotiating with the federal government for a larger Treaty to be signed to resolve all outstanding issues. Kanesatake First Nation leaders claim that the federal government walked away from the treaty table in 2006.

In a strange twist of fate, the photographer and the Mohawk Warrior were brought together one more time in death. While playing hockey Tom Hanson collapsed and died of a heart attack on March 10, 2009. Later in the day Richard Nicholas, the man Hanson photographed, died in a three-vehicle accident near Oka on the same Highway 344 where his picture was taken. They were both 41-years-old.