Behind the camera: Charles O’Rear
Where: Sonoma County, California
Photo Summary: A hillside next to the shoulder of Highway 121
Picture Taken: 1996

In 1996 photographer Charles O’Rear was driving on Highway 121 through the Napa and Sonoma counties to the city of Marin. Looking over at the beautiful green hill and perfect sky O’Rear made the decision to pull over and snap the scene. Much later Microsoft Windows XP was looking for a picture and selected this one, renaming it Bliss. They choose the picture to be the centerpiece for the Windows XP $200 million advertising campaign Yes you can.

Charles O’Rear was driving to the city of Marin and was struck by the scene he saw laid out before his eyes along Highway 121. To get the perfect shot he got out of his car and poked his medium format camera through the wire fence. He chose the ISO and f-stop settings and pushed the shutter. He would later remark in an interview:

Photographers like to become famous for pictures they created, I didn’t ‘create’ this. I just happened to be there at the right moment and documented it. If you are Ansel Adams and you take a particular picture of Half Dome and want the light a certain way, you manipulate the light. He was famous for going into the dark room and burning and dodging. Well, this is none of that.
I sure would have liked to have sold them another photo, But I think this is one that will be recognized by more people on the planet than any other photograph. People may still remember it when I’m dead and gone. It will probably be mentioned in my obituary.

To have full ownership of the photo Microsoft paid a huge sum, “one of the largest amounts ever paid to a living, working photographer.” 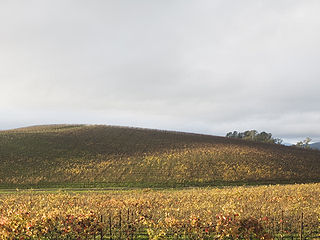 Charles O’Rear is a professional photographer who has travelled the world taking pictures for National Geographic. He got his first camera when he was 10 and in his hometown of Butler, he worked as a sports reporter for the Daily Democrat. Moving to the big city he shot pictures for the Kansas City Star before he moved and worked for the Los Angeles Times shooting celebrities. After seeing his pictures National Geographic decided to give him a job and sent him to Alaska. For the next few decades, he worked NG taking pictures all around the world. While travelling through Indonesia on a year-long assignment he used over 500 rolls of film or thousands of pictures. Of all those only 25 for use for the issue of the magazine. He is now based out of Napa Valley, California and has published nine books of wine photography, including his best-selling Napa Valley: The Land, The Wine, The People

and his wife co-wrote the Wine Across America: A Photographic Road Trip