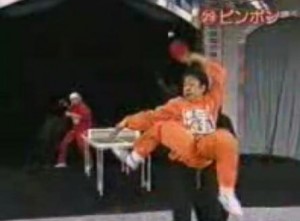 Matrix Ping Pong is a famous video clip that makes the rounds as an Internet meme on the web. It is a recording from the popular annual Japanese show Kinchan and Katori Shingo’s National Costume Competition (欽ちゃん＆香取慎吾の新！仮装大賞). The video shows a group of people attempting to mix moves in the style of The Matrix movie while parodying another, Japanese movie named Ping Pong

, using kurokos (stagehands dressed all in black that are used in Japanese theatre) to hold the actors and the props up. This performance won the competition on March 31, 2003.

The video opens with what appears to be two competitors about to start a ping pong match. On closer inspection, you can see the kurokos in the background that move the various parts of the stage. Each “competitor” is made up of two people one controls the visible top half and the other the legs, the visible lower half. All told there are 7 people involved in the skit:

On the screen appear the Skit Title and 29. The title is in Katakana letters that translate into PingPong and the contestants are number 29.

In each episode, there are 30 or so skits that individuals or groups of people act out. There is a panel of 10 judges, each with two buttons to vote with. At the end of each skit, they vote on how much they liked it, with 15 being a passing score and 20 being the max score. So if they didn’t like the skit then they give no points, kind of liked it then they get 1 point, really like it 2 points. If a skit gets below 15 then don’t move onto the next round but if they get above 15, they get a medal and get a chance to win money. This is why and the end of the skit you see them cheering and hugging each other because they got above 15 points.

Kasou Taishou or the (欽ちゃん＆香取慎吾の新！仮装大賞; Kinchan and Katori Shingo’s National Costume Competition) is a semi-annual show on NTV in which various amateur groups (or solo artists) perform short skits, which are rated by a panel of judges. It originally was just a show to showcase costumes but as people started performing to showcase their costume the show, especially in recent years, has evolved into skits that revolve around clever methods of “faking” cinematic special effects on a live stage, like “Matrix Ping Pong”. You can view the winners of each episode on the official website press the sixth link down on the left menu bar.