The story goes that on April 19, 1934, Colonel Robert Wilson, a respectable surgeon, was driving along Loch Ness when something in the water caught his eye. He quickly whipped out his trusty camera and took some pictures. Rumours and sightings of the Loch Ness Monster had created a media sensation in the early 1930s. When Wilson’s picture was published, believers seized it as the irrefutable proof that some kind of large beast lived in the lake. Wilson refused to be drawn into the speculation, never publishing the picture himself and refused to have his name associated with it. Therefore the picture became know as the “The Surgeon’s Photo”

Loch Ness (Loch means Lake) is 37km (23 miles) long and more or less shaped like a big rectangle with an average width of 1.5km (about a mile). With a surface area of 56 km2, (22 miles2) Loch Ness is the second largest in Scotland terms of surface area. When you take into account how deep the lake is though, deepest part 226 m (740 feet), it is the largest by volume. It’s said that Loch Ness has as much fresh water as all of England and Wales. The city of Inverness is only a few kilometers north of the Loch. The area surrounding the Loch has a high peat content that drains into and makes the lake dark and murky. Even though the lake is cloudy it supports a variety of wildlife including salmon, eels, pike, sticklebacks, sturgeon, trout, seals, otters and supposedly Nessie.

Thou shalt go no further, nor touch the man
-St. Columba

The Scottish tribes who lived in the area, the Picts, named after their Painted bodies, have many legends about a monster that lived in Loch Ness. Some of their art recovered from archaeological finds show the carving of a strange water beast. Ancient historians recorded almost 1500 years ago that St. Columba, who converted much of Scotland to Christianity, had an encounter with a monster. While attending a funeral for a man who had been killed while swimming in the lake St. Columba saw that a monster was approaching another man. The ancient historian, Adamnan reports that St Columba said, “ ’Thou shalt go no further, nor touch the man; go back with all speed.’ Then at the voice of the saint, the monster was terrified, and fled more quickly than if it had been pulled back with ropes.”

It wasn’t till the 30’s that the Loch Ness legend spread outside rural Scotland. In the May 2, 1933, edition of the Inverness Courier it was reported that a Mr. and Mrs. John Mackay saw what they described as a huge animal splashing about before diving into the lake. This report sparked huge media interest throughout the country. All the major papers sent reporters to the Scottish backwater in hopes of catching a glimpse of the beast that would become to known by the nickname, “Nessie”. It was this media attention that solidified the belief some sort of monster lived in the depths of Loch Ness.

Sightings soon became commonplace and were helped by the fact that in the ’30s a new highway was built along the northern shoreline, allowing people to drive the length of the lake. One newspaper, The Daily Mail, hoping to catch the scoop hired a famous self-described big-game hunter named Marmaduke Wetherell to investigate. He wasn’t able to bag the beast but he did find some huge tracks leading into the lake that he proudly displayed to the press. When the Natural History Museum tried to confirm the find they quickly discovered that the footprints had been a hoax made by a dried Hippo’s foot. Something that at the time was commonly used for umbrella stands. Wetherell was humiliated by being taken in by the prank and bitterly faded from the limelight but his link with Nessie didn’t stop there. It wasn’t until 1994 that Wetherell’s role in the creation of the Nessie legend became public. 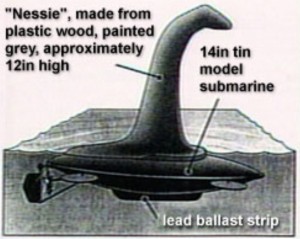 Model of the Nessie Submarine

Alastair Boyd, a self-described true believer, who himself witnessed a huge beast in Loch Ness has spent years researching Nessie. In the early 90’s David Martin, a friend of Alastair came across an old 1975 article detailing a claim that Ian Wetherell, the son of Marmaduke Wetherell, claimed that the surgeon photo was a fake. They decided to investigate further and found the location of Marmaduke Wetherell surviving stepson Christian Spurling, as Ian Wetherell had already died. Christian Spurling when confronted with the story, aged 90 himself and on his deathbed, confessed that yes the surgeon picture was a hoax, and the mastermind behind it was, Marmaduke Wetherell.

Instead of continuing the search after the hippo foot incident, Wetherell decided to get even. Christian Spurling his stepson remembers him saying, “we’ll give them their monster”. Spurling, a professional model-maker, was asked by his stepfather to sculpt something that would fool the public. Starting with a toy submarine Spurling added a long neck and small head. He recounted that the mock-up, “was modelled on the idea of a sea serpent.” The finished product was about 45 cm long, and about 30 cm high with a lead keel for stability on the water. On a quiet day Marmaduke Wetherell his son Ian and stepson Christian Spurling went down to the lake where Ian took some pictures of the “monster”. As a finishing touch, Marmaduke Wetherell convinced Dr. Wilson to develop the photo and sell it to the Daily Mail to add respectability to the hoax. Wetherell knew Wilson through a mutual friend, Maurice Chambers, the same man Dr. Wilson claimed he was visiting when he talked about taking the Surgeon Photo to reporters in 1934.

I would actually stake my life on their existence
-Alastair Boyd

Even though Alastair Boyd uncovered the hoax, he still has faith. That one of the biggest pieces of evidence supporting the existence of Nessie was a lie hasn’t fazed him, “I am so convinced of the reality of these creatures that I would actually stake my life on their existence,” recalling how he himself has seen something in the lake, “I trust my eyesight … I used to make my living teaching people how to observe, and I know that the thing I saw was not a log or an otter or a wave, or anything like that. It was a large animal.”

After the “surgeon photo” emerged in the ’30s, the general consensus was that Nessie was a leftover from the dinosaurs, maybe an ancestor of the plesiosaurs, a huge dinosaur that used fin-like appendages to move through the water. The leftover dinosaur theory is discounted though because the plesiosaurs existed millions of years ago and the loch itself is only about 12,000 years old, created by glacier excavation during the last ice age. So what is Nessie? Before the “surgeon photo” early sighting reported a large gray animal with legs and a long neck. Intrigued by this pre-“surgeon photo” sighting another researcher, Dr. Clark, spent two years investigating the legend.

After finishing his research, Dr. Clark suggests that Nessie was created in the mind of one Bertram Mills, a circus promoter. Clark thinks that Nessie was a “magnificent piece of marketing” created when Mills saw his circus elephants washing. Circus fairs visiting the city of Inverness would stop on the shore of Loch Ness too, “allow their animals to rest. When their elephants were allowed to swim in the loch, only the trunk and two humps could be seen: the first hump being the top of the head and the second being the back of the animal.” When the Loch Ness Monster story broke Bertram Mills offered a £20,000 reward, £1 million in today’s money, to anyone who could catch the monster. That’s a lot of money to risk but not if you know that the monster is really a couple of elephants already in your circus. Then his £20,000 reward doesn’t become a reward it becomes an advertising tool for the circus, as newspapers around the world report about Bertram Mill circus’s offer.

In 2003 the BBC tried to answer the question once and for all. Using 600 individual sonar beams and satellite technology the BBC team surveyed the murky depths of Loch Ness. “We went from shoreline to shoreline, top to bottom on this one, we have covered everything in this loch and we saw no signs of any large living animal in the loch,” said Ian Florence, one of the experts brought onto the team. Another specialist, Hugh MacKay noted, “We got some good clear data of the loch, steep sided, flat bottomed – nothing unusual I’m afraid. There was an anticipation that we would come up with a large sonar anomaly that could have been a monster – but it wasn’t to be.”

Having failed to find a large sonar target the BBC team sought to explain the Loch Ness Monster in a different light, that Nessie was a self-perpetuating myth. People wanted to see the monster after hearing about it and they saw what they wanted to see. To prove this theory the BBC team created an experiment where a fence post was submerged underwater and then raised in front of a busload of tourists. When later asked to sketch what they had seen most drew a square fence shaped object but a few drew monster-head shapes.

Using the BBC data and other previous sonar expeditions, researchers were able to conclude that not enough prey stock would exist in Loch Ness to support any large animal. The Loch’s murky waters can’t support enough fish and other wildlife to support a number of large predators needed for a self-sustaining breeding population. Another nail into the legend of Nessie’s coffin is a report by the Italian geologist, Luigi Piccardi. Piccardi came to the conclusion that seismic activity below the lake causes underwater waves, groans, and gaseous explosions that have kept the myth of the Loch Ness Monster alive for years. His report is backed up by studies that show when there is seismic activity in the area Nessie sightings seem to spike. The people who flock to Loch Ness every year don’t seem to care about all the evidence against Nessie, with many Nessie sightings still reported every year. Indeed no matter what the truth behind the Loch Ness legend one thing is for certain, the Loch Ness monster is very good for the Scottish tourist industry.

Kent State Shooting
Escaping over the Taedong Bridge
Churchill and the Tommy Gun
Starving Sudanese girl
Mohawk Warrior
Wait for me, Daddy
And babies
Reaching Out
MacArthur and the Emperor
The Churchill Portrait