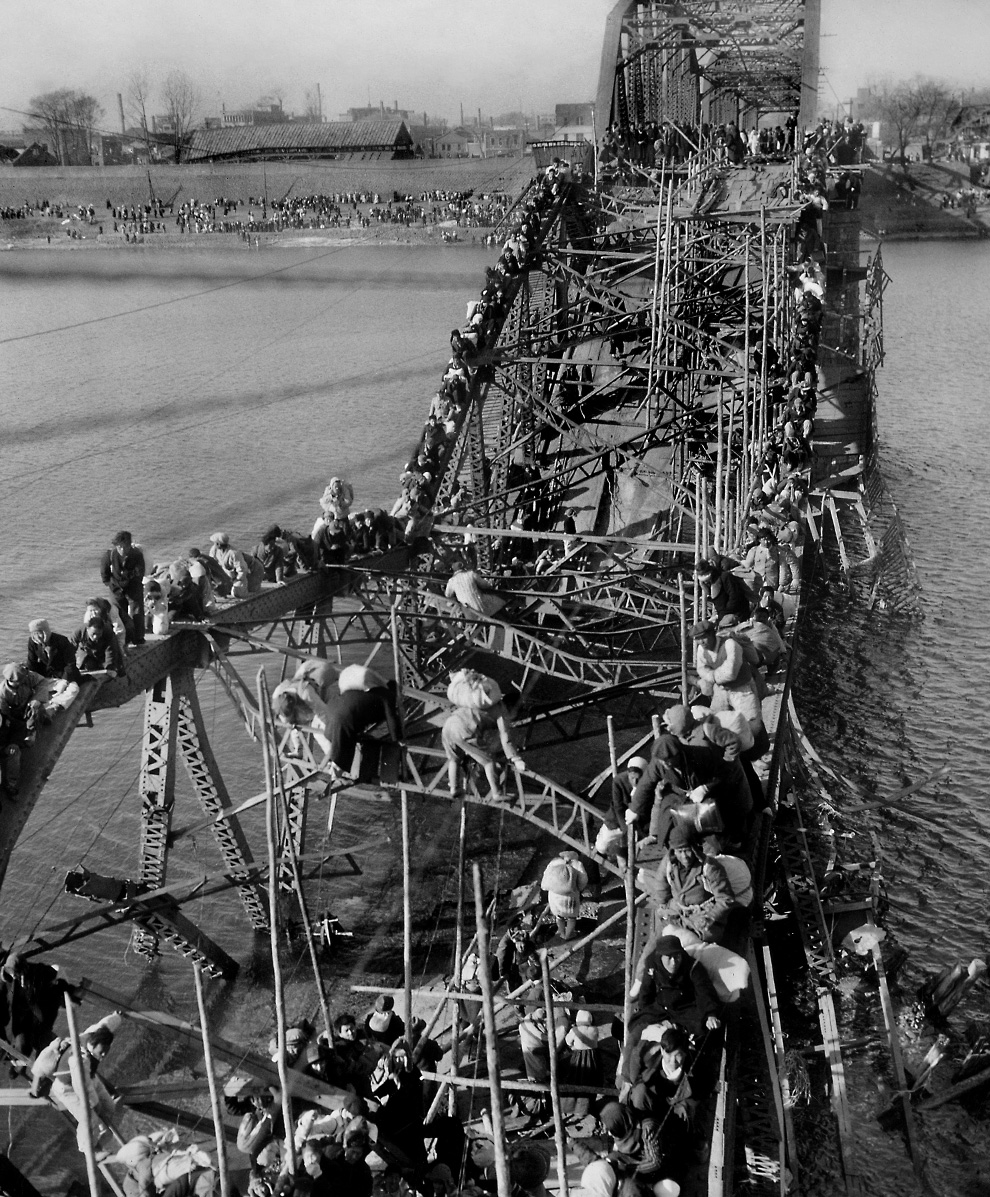 Late 1950 in the Korean War saw the direct entry of China into the Korean War. North Korean forces along with huge numbers of Chinese reinforcements not only broke the United Nations advance but sent them reeling. American forces, who made up the most of the United Nations forces, started the longest retreat in U.S. military history. As UN forces retreated so to did Korean civilians, with thousands fleeing from the advancing communist forces. Near the North Korean capital of Pyongyang AP photographer Max Desfor took this picture on a freezing December day as Korean refugees struggled across the ruined bridge. The image went on to win the 1951 Pulitzer Prize for photography.

When he heard war had broken out in Korea 36-year-old Max Desfor volunteered at his work in the AP news service to cover the war. His supervisor initially tried to dissuade him from going as he didn’t think the war last two weeks. Desfor persisted and joined United Nations forces as they retreated from the North Koreans in the initial stages of the War. He was free to roam the various army groups and remembers that “embedding was not a term we used in Korea. We were not directed as to whom to go with. We were completely on our own.
He took part in a number of operations and after the hugely successful Inchon landing that forced the North Koreans into retreat, he took part in a parachute jump with the 187th Regimental combat team. “It was just about mid-way from Seoul to Pyongyang when I heard of a parachute jump that was going to take place… it was incredible – what an experience it is to make a parachute jump,” said the photographer. Even though the United Nations had by late 1950 occupied most of North Korea the direct involvement of China into the war changed everything. A string of battles broke the UN advance and they forced to retreat before the combined forces of the Chinese and North Koreans.

Retreating with United Nations forces Desfor remembers stumbling upon an incredible scene in the freezing weather of December of 1950. In a the book Remembering the Forgotten War Desfor recalls:

I liberated a jeep from someone and joined the retreat. With me were [Tom Lambert (AP) and Homer Bigart(NY Times)] and an army signal corpsman. We crossed the Taedong River on a pontoon bridge that had just been hastily erected by the army engineers … On the south side of the river … [civilians] were walking across where the ice was solid and clogged the river. A little farther upstream, where the water was still open, they were crossing in small boats. As we jeeped farther southward … I saw what had been a sturdy span across the river, obviously recently destroyed by aerial bombs … with Koreans fleeing from the north bank of the Taedong River, crawling through and into and above and onto the broken-down bridge, it was like ants crawling through the girders. They carried what little possessions they had on their heads or strapped to their shoulders, and on the north side I saw thousands more lined up waiting to do the same thing, waiting to crawl and join the rest of them.

Desfor actually had trouble working his camera due to the plummeting temperatures. Falling off the bridge into the freezing river was likely a death sentence yet the thousands of refugees kept streaming across the bridge. Years after the war Desfor was struck by the “deathly silence” of the scene. The reporters continued on their way to what was left of the airport and put his film on the last Air Force Plane. He could have been evacuated with his film but decided to keep reporting the retreat. He did, however, get word to Bill Achatz the photo editor in AP Tokyo to look out for the film. Achatz got the film and transmitted it to the States on December 5, 1950.

Desfor was born in 1914 and was an Associated Press photographer. He covered the Pacific Theater during World War II and was one of the photographers that photographed the Enola Gay crew when it returned from the Hiroshima Atomic Bombing. He was also able to record the Japanese surrender in 1945. After World War II he covered the Indonesian National Revolution in 1946 and the Indian Pakistan Kashmir War in 1947. In 1950 he returned to America after being stationed with his family in Rome, Italy. When war broke out he volunteered to cover the war taking a number of photos but it was this image that won him a Pulitzer Prize. In 1936 he married Clara Mehl until 1994 when she was taken from him in a horrible car accident. He lived another two decades after his wife’s death, dying himself at his Silver Spring, Maryland home on February 19, 2018, at the age of 104.