Behind the camera: Robert Capa
Where: ‘Easy Red’ beach on the American Omaha beach of Normandy
Photo Summary: Edward Regan or Huston “Hu” Riley lying in the surf while trying to make it to Normany’s ‘Easy Red’ beach
Picture Taken: June 6, 1944 (D-Day)

Robert Capa had made a name for himself as a war photographer that had covered the Spanish civil war and the Second Sino-Japanese War. To escape the Nazi’s he moved to New York where he became a photographer for the Allies. On D-Day June 6, 1944, the Allies started their much-anticipated invasion of mainland Europe. Hitting the beaches with American troops Capa, while dodging intense German fire, was able to take 106 pictures before returning to London to develop his photos. Unfortunately, an incident in the London photo development labs caused all but 11 of his 106 pictures to be destroyed. This shot of a soldier in the water is considered the best and shows the true nature of the Normandy invasion. Steven Spielberg was so inspired by this shot that for the Saving Private Ryan movie he tried to duplicate the conditions shown in the photo.

Life magazine published the surviving 11 pictures with a caption that explained that the “immense excitement of [the] moment made photographer Capa move his camera and blur [his] picture.” Capa always resented the implication but it probably influenced the naming of his 1947 memoir, Slightly Out of Focus. In his memoir he remembers that day:

The flat bottom of our barge hit the earth of France … The boatswain lowered the steel-covered barge front, and there, between the grotesque designs of steel obstacles sticking out of the water, was a thin line of land covered with smoke — our Europe, the ‘Easy Red’ beach.
My beautiful France looked sordid and uninviting, and a German machine gun, spitting bullets around the barge, fully spoiled my return. The men from my barge waded in the water. Waist-deep, with rifles ready to shoot, with the invasion obstacles and the smoking beach in the background gangplank to take my first real picture of the invasion. The boatswain, who was in an understandable hurry to get the hell out of there, mistook my picture-taking attitude for explicable hesitation and helped me make up my mind with a well-aimed kick in the rear. The water was cold, and the beach still more than a hundred yards away. The bullets tore holes in the water around me, and I made for the nearest steel obstacle. A soldier got there at the same time, and for a few minutes, we shared its cover. He took the waterproofing off his rifle and began to shoot without much aiming at the smoke-hidden beach. The sound of his rifle gave him enough courage to move forward, and he left the obstacle to me. It was a foot larger now, and I felt safe enough to take pictures of the other guys hiding just like I was.
I felt a new kind of fear shaking my body from toe to hair, and twisting my face. [seeing a landing craft] I did not think and I didn’t decide it, I just stood up and ran toward the boat. I knew that I was running away. I tried to turn but couldn’t face the beach and told myself, ‘I am just going to dry my hands on that boat.’

Inside the landing craft, he returned to the ships further offshore and promptly fell asleep with the undeveloped 106 pictures that he had taken with his two Contax cameras. Upon arriving back in the UK he quickly sent his four rolls of film off to London and with his pictures off and his courage restored he tried to make it back to the beaches.
[midgoogle] 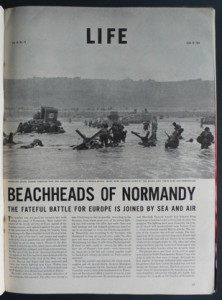 Of all the photographers sent out with the Allied invasion, only Capa had taken any sort of photos that showed what looked like the invasion that was being broadcast over the radio. Other photographers were either foiled by weather from taking any decent shots or landed on beaches that faced little German opposition. When Capa’s images came in Life editors were desperate for any type of action shots and when the package finally arrived in London orders were to rush the development.
The pressure got to the LIFE staff and John Morris remembers that a young boy, Dennis Banks, was given the task to develop the film. As LIFE staff started ringing asking where the images were Morris remembers that the young Dennis came running up the stairs and into his office, crying. “They’re ruined! Ruined! Capa’s films are all ruined!” Dennis then proceeded to choke out an explanation that he had hung the film to dry but in order to speed up the process he had closed the doors to the drying room. Without ventilation, the emulsion had melted most of the exposures. However, on further inspection, it was revealed that not all were ruined as on the end of the fourth roll 11 images were salvageable. It was these images that were the only record of fierce German resistance the Americans suffered during the Normandy invasion. 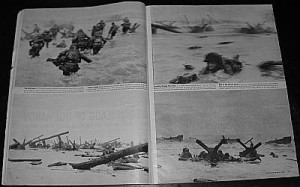 Robert Capa was born on October 22, 1913. He was born with the name Endre Ernő Friedmann in Budapest, Hungary. When he was 18 he left Hungary for Germany but when the Nazis took power he emigrated again to Paris. It was from Paris that he went to Spain to cover the Spanish Civil War. After Franco defeated the Republic Capa returned to France until the Nazi invasion upon where he left for America. He went on to become a celebrated war photographer covering five different wars: the Spanish Civil War, the Second Sino-Japanese War, World War II across Europe (He was the only “enemy alien” photographer for the Allies), the 1948 Arab-Israeli War, and the First Indochina War. His two most famous pictures are the, Falling Soldier and this image of the 1944 D-Day Normandy invasion. In 1947, Capa co-founded Magnum Photos with, among others, the French photographer Henri Cartier-Bresson. Magnum Photos was the first cooperative agency for worldwide freelance photographers. In 1947 Capa travelled to the Soviet Union with his friend, John Steinbeck. When he was leaving the country Soviet officials wanted to look through his undeveloped images. Capa refused to give them access unless Yevgeny Khaldei developed them. Capa had befriended the photographer while the two covered the Potsdam Conference and the Nuremberg Trials together. Both men were hard-drinkers and recognized as playboy lady killers.
On May 25, 1954, at 2:55 p.m. Capa was with a French regiment in Vietnam when he left his jeep to take some photos. While walking up the road he stepped on a land-mine and lost his leg. He was quickly rushed to a small field hospital but was pronounced dead on arrival due to massive trauma and loss of blood.


Who is in the picture

The man lying in the surf was identified as Edward Regan. Regan remembers that he, “was in the second wave and landed at H-hour plus forty minutes … there were so much chaos and mass confusion that one was reduced to a state of almost complete immobilization” Regan was in Company K of the 116th Infantry Regiment’s 3rd Battalion. However, the daughter of another soldier, Alphonse Joseph Arsenault, claims that the person in Capa’s photo is in fact her father that is lying in the surf and historian Lowell Getz claims that his research shows that the man is Huston Riley. Riley claims that Capa actually helped him out of the water, “I was surprised to see him there. I saw the press badge and I thought, ‘What the hell is he doing here?’ ” he said. “He helped me out of the water and then he took off down the beach for some more photos.”

3 thoughts on “D-day soldier in the water”