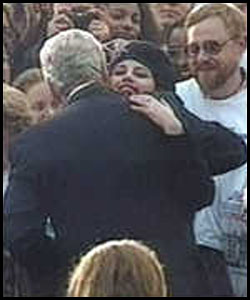 After the scandal, it was hard for Monica to get any kind of work. She was able to publish a successful book and was paid around $1,000,000 from the rights for her famous Barbara Walters interview. At 70 million viewers it was the second highest watched news program in history (The first is Oprah’s prime-time interview with Michael Jackson) but most of that went to legal fees and high cost of living now that she was a celebrity. There was a failed Jenny Craig spokesman gig and for a while, she ran an Internet handbag store and had some success as a reality TV show star. Eventually, she couldn’t take the constant media pressure and moved to the UK, graduating with a master’s degree in social psychology from the London School of Economics in 2006. Anonymous Monica friends have been quoted as saying that, “no one will hire her and she can’t get a job because of Clinton.”

1 thought on “Bill and Monica”