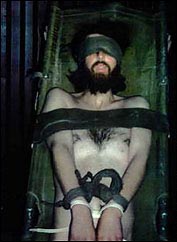 Behind the camera: This picture was part of a series that Special Forces troops took as souvenir pictures of them ‘posing’ with John Walker Lindh
Where: In a shipping crate at American military base, Camp Rhino (70 miles south of Kandahar)
Photo Summary: John Walker Lindh strapped to a stretcher
Picture Taken: Dec 7, 2001

John Walker Lindh or the American Taliban was made a media sensation after his discovery during the US military action in Afghanistan in response to the 911 attacks. Lindh in 2001 was serving in Afghanistan’s Taliban forces who were part of Afghan civil war against the Northern Alliance. After 911 the American government demanded the give up Osma Bin Laden when the Taliban refused US forces entered the ongoing civil war on the side of the Northern Alliance. Lindh was part of a group of Taliban soldiers in Konduz region that surrendered to Northern Alliance forces on November 25, 2001. These same soldiers staged a violent uprising in their prison near Mazar-e Sharif. Lindh, while wounded by a bullet in the thigh, was one of a few survivors of the failed prison uprising and was taken into US custody on, December 2, 2001. While in US custody American Special Forces took hundreds of souvenir pictures with Lindh strapped down to a stretcher. This was one of those pictures.

This is against Islam. It is a major sin to break a contract
-Lindh

About 300 Taliban entered Qali-i-Jangi, a 19th-century fortress on Nov 24, 2001. Many of them where Non-Afghan fighters who felt they had been betrayed as they had been promised to be deported if they surrendered, not taken to the Qali-i-Jangi prison. An uprising was sparked on the 25th and over the course of the next 8 days, the prisoners were bombed into submission until 86 holdouts, including Lindh, agreed to surrender after Northern Alliance forces flooded the basement they were holed up. When Lindh’s Taliban Unit surrendered to Northern Alliance forces part of the agreement was that they would give up all weapons. In an interview taken shortly after being captured while he was partially drugged on morphine, Walker said that some of the Taliban had hidden grenades, “This is against what we had agreed upon [with the Northern Alliance], and this is against Islam. It is a major sin to break a contract, especially in military situations,”. It was these grenades that set the stage for the uprising that would wound Lindh and kill CIA operative, Mike Spann. Spann’s death went on to become major news as he was the first American to die in combat in Afghanistan.

American Special forces took hundreds of souvenir pictures and home videos of Lindh while he was strapped down to a stretcher. Even though the Geneva Convention prohibits activities that might humiliate prisoners. The rest of the photos were not made public and most were destroyed when their existence was discovered by superior military personnel. While the government denies destroying evidence Lindh’s lawyers had to get a federal judge to order a “preservation order” for all evidence, including videos and photographs.

He appeared to be suffering from hypothermia, and exposure, and acted delirious
-Special Forces Agents on Lindh’s condition

During the federal government prosecution of Lindh’s case, serious questions were raised about his treatment after his capture on Dec 1, 2001. It emerged that during the uprising which lasted from Nov 25 to Dec 1, 2001, Lindh had been wounded and had very little to eat and almost no time to sleep. From the fortress prison, he was bundled into a truck with the other prisoners and taken to the nearby town of Sheberghan where he arranged with CNN correspondent Robert Pelton to get medical care in exchange for an interview. According to Special Forces personnel who were present at the time Lindh, “was malnourished and in extremely overall poor condition … he appeared to be suffering from hypothermia, and exposure, and acted delirious”. The bullet in his thigh was not removed at this time. He spent the night in town and the next day was taken to the Turkish School House in Mazar-e Sharif where he was questioned by special forces over a week while receiving very little food or sleep. On Dec 7 he had still not received medical attention for his leg but on that day was transferred to official US military control and taken to an American military base, Camp Rhino (located 70 miles south of Kandahar). It was here while strapped to a stretcher that his clothes where cut off, placed in a metal shipping container and photographed. For two days he was held naked in the shipping crate, still without medical attention, before on Dec 9 he was handed over to the FBI for more questioning. After the questioning, he received some clothing and food but was placed back into the shipping crate. On Dec 14 he was flown to the USS PELELIU. The next day on Dec 15 almost two weeks after his capture at the prison Lindh had an operation to treat his wounds.
[midgoogle]

Walker was born in Washington, D.C.(born February 9, 1981), to parents Marilyn Walker and Frank Lindh. He was baptized Catholic and grew up in Silver Spring, Maryland, until he was ten years old and his family moved to San Anselmo, California, in Marin County. Walker was sickly as a boy due to an intestinal disorder, after briefly attending several middle schools his family opted to home school him starting in 1993 when he was 12. He tried to go back to school but never fit in opting for self-study and earning a GED at age 16.
During this time Walker was a shut-in, rarely leaving home but increasingly participating in IRC internet chat rooms, often using fake names. He became a devoted fan of Hip-hop music, and engaged in extensive discussions on BBS groups about the music, sometimes pretending to be African American. During this time, Walker saw the Spike Lee film Malcolm X which made a deep impression on him and began his interest in Islam.
In 1997 he officially converted to Islam and began regularly attending mosques in Mill Valley and later San Francisco. In 1998, he travelled to Yemen for about ten months, to learn Arabic so that he would be able to read the Qur’an in its original language. He returned to the United States in 1999, living with his family for about eight months before returning to Yemen in February 2000, whence he left for Pakistan to study at an austere madrassa (Islamic school). It was in Pakistan that he attended a militant training camp and where he chose to go to Afghanistan in the spring of 2001. He was trained by a militant group funded by Osma Bin Laden and sent to front lines to fight the Northern Alliance just before the Sept 11 attacks.

The federal government initially charged Walker with the following charges:

If convicted of these charges, Walker Lindh would have received multiple life sentences, six additional 10-year sentences, plus 30 years. However, the government faced the problem that a key piece of evidence—Walker’s confession—might be excluded from evidence as having been forced under duress and torture.
To forestall this possibility, Michael Chertoff, the head of the criminal division of the Justice Department, directed the prosecutors to offer Walker a plea bargain: He would plead guilty to two charges — serving in the Taliban army and carrying weapons. He would also have to consent to a gag order that would prevent him from making any public statements on the matter for the duration of his twenty-year sentence, and he would have to drop claims that he had been mistreated or tortured by U.S. military personnel in Afghanistan and aboard two military ships during December 2001 and January 2002. Any profits Walker might make from telling his story will be taken by the government. In return, all the other charges would be dropped.
Walker accepted this offer. On July 15, 2002, he entered his plea of guilty to the two remaining charges. The judge asked Walker to say, in his own words, what he was admitting to. “I plead guilty,” he said. “I provided my services as a soldier to the Taliban last year from about August to December. In the course of doing so, I carried a rifle and two grenades. I did so knowingly and willingly knowing that it was illegal.” On October 4, 2002, Judge T.S. Ellis, III formally imposed the sentence: 20 years without parole.:
Walker is now imprisoned in a medium-security prison in Victorville, northeast of Los Angeles. His attorney, James Brosnahan, said Walker would be eligible for release in 17 years, with good behavior.


Common Misconceptions About the American Taliban

On May 23, 2019, Walker Lindh was released from prison after serving 17 years of a 20-year sentence. His release stirred up controversy as the National Counterterrorism Center and the federal Bureau of Prisons published reports saying that, as of 2016, Lindh “continued to advocate for global jihad and to write and translate violent extremist texts … told a television news producer that he would continue to spread violent extremist Islam upon his release.” For the three years of his probation, he will be supervised by Judge T.S. Ellis, in Virginia. He faces a number of restrictions some of which include: